How Will #MeToo Show Up on the Oscars Red Carpet? Here’s What to Watch For

When awards season kicked off with January’s Golden Globes, all eyes were on the red carpet as actors wore all-black looks to show solidarity with victims of sexual harassment.

It was the first major televised event following numerous allegations of sexual abuse and assault leveled against powerful men like Harvey Weinstein, in Hollywood and beyond. Time’s Up, an initiative to eliminate sexual misconduct and gender inequality in the workplace, organized the demonstration. Several actresses brought activists as their guests, many wore Time’s Up pins and pre-show interviews were redirected from fashion to issues like the gender pay gap.

The awards shows circuit since has followed suit. At the Grammys, many attendees wore white roses for Time’s Up, while the SAG Awards introduced an all-women presenter lineup. At the BAFTAs, while attendees were asked to wear all-black as at the Globes, another protest took place when domestic violence activists crashed the red carpet to stage a demonstration. As the Oscars near, many are wondering whether Hollywood’s biggest night will also create space for Time’s Up and #MeToo. Here’s what we know ahead of Sunday night’s broadcast.

It seems the night will be focused more on celebrating film than on political demonstrations. According to a report by the New York Times, sources have said that Time’s Up is not asking attendees to wear all-black (instead, wearing a Time’s Up lapel pin would be “appreciated”) and that there are no plans for activists to attend. Variety reported that although there won’t be a coordinated protest, Time’s Up leaders have confirmed that both the movement and their legal defense fund will be highlighted. Jennifer Todd, a producer of this year’s Oscars, told the Times that the goal was to make the night a “spectacle” that would be “as entertaining as possible…fun and funny and great performances.”

Will Jimmy Kimmel talk about #MeToo?

Jimmy Kimmel, who’s returning to host the awards show for a second year, initially said he won’t focus on #MeToo or Time’s Up during the ceremony. In an interview with ABC News, he said he doesn’t believe that Oscars night should be about “reliving people’s sexual assaults.”

“It’s an awards show for people who have been dreaming about maybe winning an Oscar for their whole lives,” he said. “And the last thing I want to do is ruin that for someone who is, you know, nominated for, you know, best leading actress or best supporting or best director or cinematographer, or whatever, by making it unpleasant…That’s not what I want to do. I’m not going to stop any bad behavior with my jokes.”

It was a view shared by Channing Dungey, president of entertainment at ABC, the network that will be broadcasting the show. “We certainly want to honor and respect Time’s Up and allow that message to be heard,” Dungey told the New York Times. “But we’re trying to make it more planned than spur of the moment — it has its moment and then doesn’t feel like it overshadows the artists and films being honored…I would love for every award recipient to not feel like they have to acknowledge it independently.”

In later interviews with Variety and Vanity Fair, however, Kimmel said that #MeToo would be “part of the show” and that he was planning on including material that addressed Time’s Up.

How will the Oscars address Time’s Up?

All of this is not to say that calls for equal and safe workplaces for women won’t be made, just likely not on the demonstrative scale seen on the Golden Globes red carpet. Besides sporting Time’s Up pins, stars may turn to subtler ways of showing support for women, like choosing to wear female designers or continuing to prioritize issues over fashion during red carpet interviews. This may prove difficult, since E! told the Times in a statement that although “viewers enjoyed hearing more about the #MeToo and #TimesUp movements” during their Golden Globes coverage, for the Academy Awards, they are planning to “balance” that focus with other subjects like fashion and entertainment. E! is also standing by their red carpet host for the night, Ryan Seacrest, despite sexual harassment allegations leveled at him this week by his former stylist for the network.

There may also be moments during the ceremony during which honorees or presenters speak out, as Natalie Portman did when she presented at the Golden Globes. It’s worth noting that three of the scheduled presenters are Laura Dern, Ashley Judd and Nicole Kidman, all of whom are outspoken supporters of Time’s Up and #MeToo.

What about after the awards shows are over?

While the demonstration may not be as overt at the Oscars, the work will continue after the show. A spokesperson for Time’s Up told the Times that the overt showing of support at the Golden Globes was central to the initiative’s kick-off, but that the group is not looking to “be just an awards season campaign, or one that became associated only with red-carpet actions.” The group is focused on raising money for its legal defense fund, which has collected more than $21 million so far. Variety reported that one of Time’s Up’s leaders, Shonda Rhimes, reiterated the group’s work away from the glitz of the red carpet and awards season during a press briefing ahead of the Oscars. 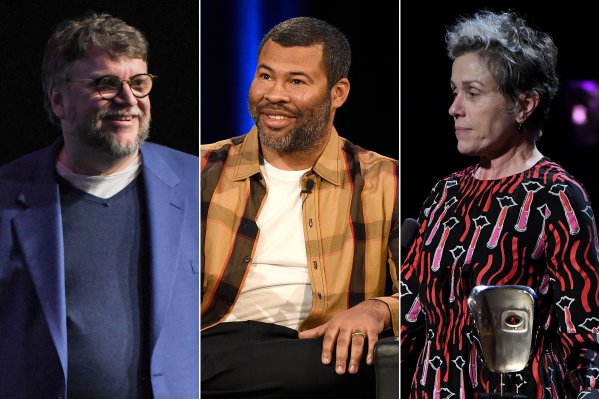 Our Predictions for Who Will Win at the 2018 Oscars
Next Up: Editor's Pick