In the wake of Joseph Stalin’s death on March 5, 1953, it seemed that while the Soviet dictator’s sudden demise was a shock — he was felled by a stroke that was kept secret from all but his inner circle for close to two days — the system he embodied might continue to work smoothly. “To all appearances, [Georgi] Malenkov took power as smoothly as a new U.S. corporation president moving into the Old Man’s office,” TIME noted the following week.

That efficiency is unsurprising to Armando Iannucci, whose new The Death of Stalin is a movie, due out in the U.S. on Friday, about that historical event—if it were filtered through the mind of the creator of Veep, which he is and it was. As Iannucci learned in researching the film, Malenkov was a consummate bureaucrat. “In the end, once he was deposed, he ended up running a hydroelectric plant, and he won an award for productivity,” Iannucci says. “Clearly that’s where he was happiest.” (Malenkov is played by Jeffrey Tambor, who was recently fired from Amazon’s Transparent following claims of harassment; Iannucci says that The Death of Stalin was made before the accusations — which he calls “a sad story” — surfaced.)

But Iannucci’s latest satire has not been without surprises. In fact, shortly before it was due to be released there, Russia banned the film, calling it “ideological warfare” — which Iannucci says is “in the spirit of the movie.” He spoke to TIME about The Death of Stalin, how history sparks creativity and how to respectfully make a funny movie about a traumatic moment in time.

How did you first connect with this story?

I was already thinking, while I was doing Veep, of looking at a fictional dictator, whether it was an American dictator or a British dictator. There were unusual things happening in Europe — we’d already had Berlusconi, and obviously Putin has a very authoritarian streak to him, and then in Turkey and various places — strong leaders emerging, and nationalist movements and disruption. Then I got sent [the book on which the movie is based] by a production company who had bought the rights to it. I read the graphic novel and I thought, ‘Why come up with a fiction when it’s all true?’ All these set pieces, they were all true, they were absurd, they were terrifying, they were farcical, they were horrific. It was that blend of comedy and, I think, paranoia, that instantly made me think, this is the story.

Your work on projects such as Veep and In the Loop focused on fictional modern politics. Why look into the historical past now?

For me it just felt more contemporary going into the past than going into the future, if you know what I mean. By taking a true event, it felt more relevant than inventing from scratch. And certainly it’s more interesting creatively, having done lots of stuff set in the present day. It takes you out of your comfort zone.

What was the research process on the project?

We went out to Moscow, we spoke to people there, we went around the Kremlin, and Stalin’s dacha. We spoke to people who grew up under the great terror in the 1940s and ’50s. We wanted to get the look absolutely right. It’s really pleasing that Russians who’ve seen the film say, ‘Where did you shoot this in Moscow?’ We actually shot it in London. And then the story took a lot of research. You know, reading biographies, Svetlana [Stalina]’s letters, accounts from the time of what went on —you pick up little incidents that aren’t in the graphic novel. [Lavrentiy Beria] really thought it was funny to put a tomato in someone’s pocket and squash it. Little things like that. Or people telling us that if you went to bed you’d go with lots of clothes on, so that if you were pulled out in the middle of the night, you’d have warm clothes.

It has that ‘you couldn’t make this up’ feel to it.

Exactly. If there’s something there that makes you think ‘that feels right’ then we probably made it up, but if there’s something that you say, ‘there’s no way that happened,’ that’ll be the true bit. We’re not claiming that this is a documentary. Obviously the dialogue is our dialogue and the action is farcical, but I felt that the more it was pinned to true events, somehow the funnier it became.

Having made a study of power’s absurdity, how did looking at this real history affect your view of it?

You sadly get a sense of what it must have been like being an ordinary citizen going through that, the low-level sense of anxiety that you had to carry with you every day. We found out that they circulated joke books about Stalin, even though you could be shot for being in possession of one. People still felt they needed to make jokes about it. The first thing I said as we started shooting was that we had to be very respectful to what happened to the people. There’s no comedy there. We just show that for real. We don’t have to comment. The comedy’s all from the senior figures inside the Kremlin.

Speaking of respecting Russian history, were you surprised Russia banned the movie?

I was. We knew the government would be sensitive, but it did get a license. It was all ready, all dubbed, ready to go into the cinemas. The overturning of that decision happened at a very late date. That was the surprise. The bureaucratic fumbling of the decision is in the spirit of the movie, and I’m still not sure how permanent that is.

It’s an ongoing process. I’m hopeful that maybe we can find a time to bring it out this year. The thing is, ironically, by banning it they made it the most famous film in Russia. It indicates all the more the pointlessness in censorship. You can’t these days because communication is so open and available one way or another. It’s not like you have to smuggle it in now on a microdot.

How does the backlash compare to how other nations have taken your satire about their politics?

We went into it knowing that Stalin has a very ambiguous position in Russia. Some people still see him as the savior and other people absolutely loathe him for what he did. It’s never been officially determined by the government which way you should feel. There isn’t an official Stalin. It’s up to you to decide. So I knew some people would hate the idea of the film and other people would absolutely love the idea of the film, which is fair enough. That’s true of all films. Actually, from those Russians who’ve seen it, it’s been greeted positively. Similarly, I was wary when we started doing Veep that the American public would say, “Who are you guys coming over from another country to tell us how dumb our politics is?” And in fact I was touched by the warm reaction. These things are very universal. The stories are all the same no matter where you go. It’s about trying to hold onto power or succeed somebody who’s in power. It’s Game of Thrones and The Godfather and the Roman Empire and everything, really.

One part of that universality seems to be the difference between what’s said and what’s meant. Do you think that gap is inevitable in politics?

[Those themes] are, and they get even more pressing the more authoritarian the politics is. I mean, when someone is telling you, ‘You’re not allowed to say these things and in fact you’re not allowed to think these things,’ those thoughts don’t go away. It becomes its own art form, how you can say one thing while clearly saying the opposite. You get it today. We have a whole debate in the U.K. about Brexit, on which our government is completely divided in two as to what action to take, but still go on television talking about great unity. Everyone knows it’s a farce. You get it in Congress. There’s the faction of Republicans who are very conservative and completely disagree with the faction of Republicans who are a little bit more liberal socially, and you get it in the Democratic Party with the Bernie Sanders radicals versus the Clintonian middle of the road. But still they have to talk about, ‘We’re just one big happy family here.’ And we all know what goes on in happy families really. 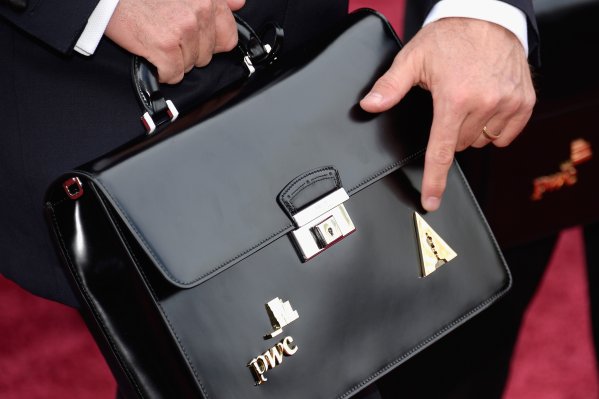 The Academy Awards Scandal That First Got PwC Its Job Counting Oscars Votes
Next Up: Editor's Pick