Kathy Griffin: Hollywood Is Changing. The Red Carpet Needs to Change Too

It’s time for the red carpet to modernize.

I’ve walked the red carpet. I’ve worked it—been hired and fired from it. And I’m still a viewer and fan who hosts red carpet parties at my house, sometimes with a boyfriend who isn’t quite sure why we’re watching. I get it: Even I’ve been fast-forwarding lately. The culture of the carpet needs to change.

My friend Jane Fonda talks about when she started going to the Oscars—there wasn’t even a red carpet. You just waved as you walked in, but nobody even interviewed you. All the ladies dressed themselves. Then we entered the wonderful era of my beloved friend Joan Rivers. The first year she worked the red carpet, celebrities ran from Joan. Eventually they ran towards her, because she actually made it different, fun and unexpected.

I think that’s what we’re really lacking. Especially in the political climate we’re in today, doing jokes about what someone is wearing doesn’t work anymore. Joan built an entire industry around interest in red-carpet fashion—but that moment is over, because every single actress and actor is hitting the red carpet fully styled by the most talented designers with absolutely no financial restrictions. And many of them are ambassadors for brands, getting paid large sums to wear a dress. Joan was so funny and different, but now we’re in a netherworld with milquetoast hosts asking questions about outfits that these celebrities have posted on Instagram before they left the house.

The red carpet needs to reflect the kind of personable interaction that we’re now able to have with celebrities. You can communicate with a celebrity via Twitter now; they’re not glass statues that need to be admired from 100 feet away. And it’s not about the dresses or about pirouetting like women are toys in a music box. Ninety percent of the viewers are aware that many of these women who are now showing up with jewels in their hair and a smile on their face have been sexually assaulted. These women believe in their projects and they want to talk about them, and they have other things to talk about sometimes, too. When you see Ashley Judd on a red carpet, you don’t want someone to say “Who are you wearing? Oh my God, you’re a sample size?” I don’t want to hear another woman asked about her “lucky charm”—many women at awards shows, we now know, have been raped. You can’t ask them to spin in front of a camera. These poor women have spun enough.

I honestly don’t think many American women are watching and writing down words like “Diane von Furstenberg” or “Oscar de la Renta.” With everything going on in the world, you don’t need the red carpet to make the average American feel like s—t. Fashion will always be a part of it—and every blog in the world is going to take it apart, tearing it apart or praising it. If I had Frances McDormand on the red carpet—God love her, no one wants to know what makeup she wears, because she doesn’t wear any—I would have a printout of the three billboards that were erected in London to seek justice for the Grenfell fire, and ask her what she thought. And I’d also ask, by the way, before you go, is Sam Rockwell really a good kisser? You can do both!

Even at the Golden Globes, where actresses took command of the red carpet by wearing black and bringing activists with them, the activists got substantially less airtime time than the actresses who brought them. A good host can find a way to include everyone and send a meaningful message—all while keeping things light, too. This country is going through a phase where people want to hear funny stuff. We want to hear encouraging stuff. And we want to hear something a little bit deeper. Activism is no longer just for Jane Fonda and Martin Sheen: We’re all activists now. And the red carpet needs to embrace it instead of fighting it.

One thing that gave me hope was watching Debra Messing on E! at the Golden Globes, when she addressed the pay inequality at the network. That was a moment! We got to see our beloved Grace looking fabulous. I saw her looking great. I didn’t need to hear her rattle off who made her earrings and her cuffs and her choker and her dress. I saw her talking about something that’s a topic for everyone in the entertainment world—and everyone at home. She was the fabulous, funny star she was, and putting someone on the spot is what live TV is supposed to be.

Good hosts will seek out moments like those—using the power of TV to generate viral moments that are fun and meaningful. I have faith some channel is going to emerge and create a next phase that’s different, meaningful, and funny. They’ll blow everyone away—just like Joan did. 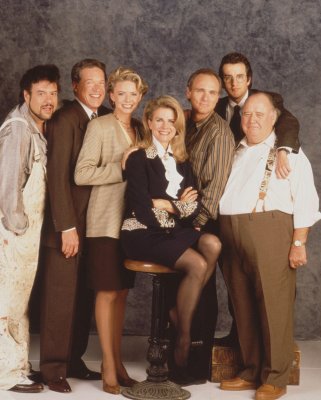