Cambodia’s ruling party swept the country’s Senate elections on Sunday, winning every seat in the legislature’s upper chamber in an all-but-predetermined contest that observers and analysts say is the latest symptom of the faltering political health of the southeast Asian country.

Preliminary results from Sunday’s poll showed the ruling Cambodian People’s Party (CPP) claimed all 58 elected seats in the Senate, according to the National Election Committee (NEC), further entrenching the dominance of the CPP and Prime Minister Hun Sen, who has ruled Cambodia since 1985.

The poll’s result demonstrates that the “death knell for democracy” in Cambodia is “ringing very loud and clear,” Mu Sochua, who was deputy president of the former opposition Cambodia National Rescue Party (CNRP), told TIME in an email. Sochua, who has lived in exile since fleeing Cambodia in October under threat of arrest, called on the international community to “speak and act with one voice” to prevent Cambodia’s reversion to a “one-party state.”

The outcome was of little surprise, however, since the CNRP, the country’s leading opposition party, was formally dissolved in November last year. The party was seen as the only viable contender to the CPP and is just one victim of a crackdown that has seen political figures and critics threatened and driven into exile, and human rights advocates and journalists arrested and imprisoned ahead of nationwide elections expected next July. The ruling party also rescinded the licenses of over a dozen independent radio stations, cutting off broadcasters Radio Free Asia (RFA), Voice of America, and Voice of Democracy, and shuttering the English-language newspaper The Cambodia Daily. Most of the CNRP’s senior officials are now in exile; Kem Sokha, the CNRP’s last president, faces up to 30 years in prison on treason charges widely understood to be politically motivated.

“With a full CPP takeover of the Senate on Sunday almost certain, any hope of the chamber evolving into anything more than a dormant body tasked with rubber-stamping the prime minister’s every legislative whim, is dead in the water,” Santiago said. “Unfortunately, the Cambodian Senate will continue to stand as yet another sad reminder of Cambodia’s unmitigated descent into outright dictatorship.”

Cambodia’s Senate is not directly elected by the general population, but by the country’s local-level commune councilors. Following the CNRP’s dissolution, the ruling party confiscated the seats won by the opposition in the country’s landmark 2013 nationwide election, in which the CNRP won a best-ever 44% of the vote, as well as commune seats won in June 2017 local polls. The reallocation granted the CPP 95.5% of commune-level positions, the Phnom Penh Post reported last year, making Sunday’s poll more of an intra-party appointment than a competitive electoral race. The King of Cambodia and the CPP-controlled National Assembly — parliament’s lower chamber — also appoint two Senate seats each.

The Senate poll was only contested by three other parties, two of them marginal factions widely understood as subservient to the ruling party. The fourth party, the royalist Funcinpec, was once the CPP’s primary rival but has since warmed to cooperating with its former adversary, accepting 41 former CNRP seats in the reconstituted National Assembly.

The political crackdown in Cambodia has not gone without notice in the West. In December, the U.S. passed targeted sanctions restricting travel against leading Cambodian politicians “involved in undermining democracy.” Potentially more damaging, E.U. sanctions currently under consideration could include the rollback of trade preferences, the Financial Times reported last week; Cambodia’s garment trade with the E.U. accounted for 43% of all of its exports in 2016, according to the International Labour Organization.

But a broad international consensus that could force Hun Sen’s hand has largely failed to materialize. Cambodia is also assured of diplomatic support from China, the country’s biggest foreign donor, which has pledged equipment and support for July’s elections after the U.S. and E.U. withdrew promised funding. In a November statement, China’s Foreign Ministry expressed confidence that the nationwide polls would proceed “smoothly.” With no credible rivals at the ballot box, Cambodia’s rulers will be sure of it. 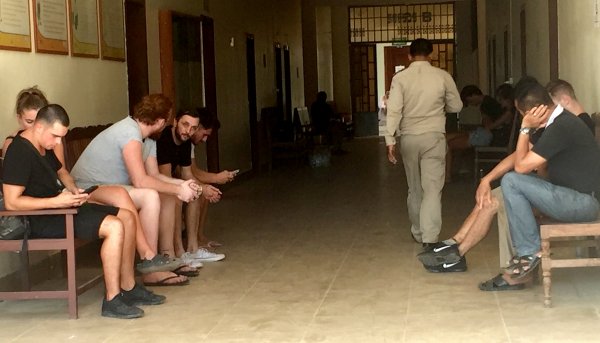 10 Foreigners Face Prison in Cambodia Over 'Pornographic Dancing'
Next Up: Editor's Pick