President Donald Trump on Friday criticized the Broward sheriff’s deputy who failed to confront the suspected gunman in this month’s deadly Florida school shooting, saying he “certainly did a poor job” and might be “a coward.”

“When it came time to get in there to do something, he didn’t have the courage or something happened,” Trump told reporters Friday morning. “He certainly did a poor job, there’s no question about that.”

“That’s a case where somebody who is outside, they’re trained, they didn’t react properly under pressure, or they were a coward,” Trump added.

Scot Peterson, a school resource officer from the Broward County Sheriff’s office, resigned Thursday after the sheriff said Peterson had waited outside the school building without ever going inside and attempting to take down the active shooter. The sheriff said Peterson “clearly” knew a shooter was in the building, but stayed outside for four minutes while the massacre took place.

Nikolas Cruz, 19, allegedly opened fire in Marjory Stoneman Douglas High School and killed 17 people, in a shooting that has reignited America’s gun control debate. Trump’s remarks came shortly before he is set to appear at the Conservative Political Action Conference, or CPAC. In the wake of the shooting, Trump has suggested training and arming teachers and other school officials, a message that echoes a long-standing push by the National Rifle Association (NRA) and one he is expected to reiterate during his CPAC speech. 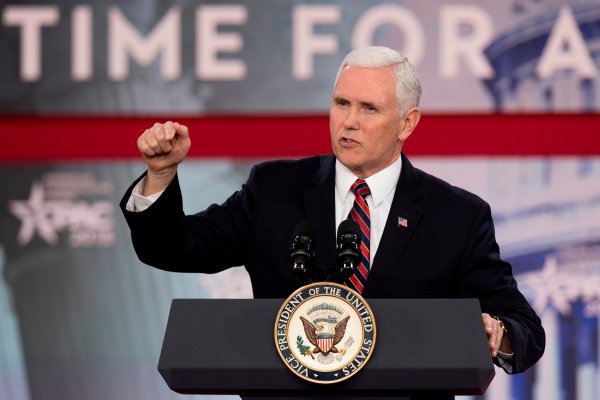 Pence Isn't Sorry for Sitting for North Korea Anthem
Next Up: Editor's Pick