Everything to Know About the Shape of Water Plagiarism Controversy

The Shape of Water, Guillermo del Toro’s fantasy drama about a woman who falls in love with an ill-fated amphibious river God, has enjoyed a gilded awards season so far. After winning the Golden Lion at the Venice Film Festival last summer, it has been decorated with awards from multiple critics’ associations and professional guilds, including the Art Directors, Costume Designers, Producers and Directors Guilds. And, with 13 Oscar nods, it is the most-nominated film heading into the 90th Academy Awards on March 4.

But the movie has hit some stumbling blocks on the path to Oscar glory, in the form of multiple allegations of plagiarism. The accusations focus on a 2015 Dutch short film and a play from 1969. While the former was dropped, the latter has resulted in a lawsuit, the claims in which del Toro and Fox Searchlight vehemently deny. Here’s what to know about the movie’s similarities to other sources and the current status of the controversy.

Which works has The Shape of Water been criticized of plagiarizing?

The first work is a 1969 play called Let Me Hear You Whisper by Pulitzer Prize winner Paul Zindel, who died in 2003. The play was later adapted into a 1990 TV movie starring Jean Stapleton. It centers on a cleaning lady working at a laboratory where a dolphin she’s grown fond of is slated to be killed for brain dissection.

The other is a 2015 short film called The Space Between Us made by a film student in the Netherlands named Marc S. Nollkaemper. The 13-minute film follows a woman who falls in love with a fish-like creature in a research facility.

The French director Jean-Pierre Jeunet also recently told Ouest France that he is troubled by a scene in The Shape of Water which bears striking similarities to a scene in his 1991 film Delicatessen. In both scenes, a man and a woman sit together, in one case on a couch and in the other on a bed, performing a choreographed dance while an old musical plays on a television in the background. In The Shape of Water, the dance is performed with the legs, and in Delicatessen, it mainly consists of upper body movements.

What are the similarities between The Shape of Water and those works?

With The Space Between Us, the similarities are mainly in the stories’ plots: woman working as a janitor becomes captivated by a mistreated, imprisoned fish-man and attempts a rescue mission. With Let Me Hear You Whisper, there are more specific commonalities. They include, according to Hollywood Nerd—whose domain, according to the Hollywood Reporter, was registered by David Zindel’s wife, Rachel Style, as of 2014—the fact that the main character is shy and doesn’t speak; their settings against the backdrop of the Cold War-era 1960s and, more specifically, a lab at which experiments are being conducted by military personnel; scenes in which the woman feeds the creature and dances to records in front of it; and rescue missions, both involving laundry carts, devised after plans to kill and dissect the creatures come to light.

What are the differences between The Shape of Water and Let Me Hear You Whisper?

In The Shape of Water, Sally Hawkins’ character, Elisa, is mute, whereas the protagonist of Let Me Hear You Whisper is not. The movie’s creature is not a dolphin but a majestic, fictitious river god. The supporting character played by Richard Jenkins in the film, Elisa’s next door neighbor, does not have an analog in the play. And the two stories end in dramatically different ways.

Where do the The Shape of Water plagiarism accusations currently stand?

Charges that the movie plagiarized The Space Between Us were dropped, with the Netherlands Film Academy issuing a statement after speaking with del Toro. “After recently screening The Shape of Water and following conversations that took place in a very constructive and friendly atmosphere, The Netherlands Film Academy believes that both The Shape of Water and our short, The Space Between Us, have their own very different identities,” the Academy said, according to Indiewire. “They have separate timelines of development and are not in any conceivable way interlinked or related.”

The estate of Paul Zindel, meanwhile, has criticized The Shape of Water, with the playwright’s son David Zindel telling the Guardian, “We are shocked that a major studio could make a film so obviously derived from my late father’s work without anyone recognizing it and coming to us for the rights.” David Zindel says he has “no ill will towards del Toro” and thinks The Shape of Water is “a good film,” but that doesn’t change his opinion that much of it is stolen from his father’s work.

The estate also filed a lawsuit in U.S. District Court, describing Zindel’s play as “a beloved work of fantasy/science fiction by an esteemed author, making the glaring similarities between the Picture and the Play too egregious to ignore.”

How did Guillermo del Toro come up with the idea for The Shape of Water?

Del Toro says he and Daniel Kraus, who co-authored a novelization of the story for release in 2018, began working on a treatment for the movie in 2011. In an interview with i09, Kraus said he was 15 when he first came up with the idea for “a story about a creature locked in a lab and a janitor that tries to break it out.” As described in Written By magazine, Del Toro was interested in remaking the 1954 monster movie Creature From the Black Lagoon but struggling with how to incorporate a romance in the narrative. When Kraus mentioned his idea, del Toro said The Shape of Water began to click into place.

How has Guillermo del Toro responded to the allegations?

Del Toro told Deadline that he had never heard of the play before making the movie, and that none of the people with whom he collaborated on the movie mentioned the play. He emphasized his spotless track record. “I have been at this 25 years and have an unimpeachable reputation,” he said. “I have always made it an element of my career to talk about my influences in every single movie I have made, in the comment track of DVDs, on Twitter, in my museum exhibitions. I have been open about the things I love, and I have had no problem discussing them and how they were transformational in my movies.”

Fox Searchlight has backed him up on multiple occasions, including in response to the lawsuit. In a statement, the studio said, “These claims from Mr. Zindel’s estate are baseless, wholly without merit and we will be filing a motion to dismiss. Furthermore, the estate’s complaint seems timed to coincide with the Academy Award voting cycle in order to pressure our studio to quickly settle. Instead, we will vigorously defend ourselves and, by extension, this groundbreaking and original film.”

Will the controversy affect the The Shape of Water’s Oscar chances?

It’s not unusual for a Best Picture frontrunner to be heavily scrutinized during the weeks leading up to the ceremony and, more importantly, the weeks when Oscar voting is open. And The Shape of Water is not the only contender under a microscope right now—many critics have called Three Billboards Outside Ebbing, Missouri tone-deaf in its handling of issues of race in small-town America.

Of the lawsuit’s filing the day after Oscar voting opened, Fox Searchlight co-president Stephen Gilula told Variety, “The timing speaks volumes.” But he added that Academy members are used to seeing lawsuits introduced this time of year, mentioning Avatar and E.T., saying it’s become almost “de rigueur.” Zindel’s lawyer told Variety the timing of the filing was a matter of when he was able to prepare the suit, and “There’s no conspiracy here to interfere with the Oscars.”

Neither controversy seems strong enough to derail these movies’ chances, however, among an Academy membership of nearly 7,000. While The Shape of Water did not win the top prize at the Writers Guild of America awards—a body that would presumably be most heavily swayed by allegations of plagiarism—it’s a big stretch to assume causation, especially given that winner Get Out easily earned the prize without the sullying of a competitor. Don’t be surprised to see The Shape of Water win many of its 13 potential awards—including, most likely of all, one for Best Director.

Correction: The original version of this story misstated who told the Guardian he has “no ill will towards del Toro.” It was David Zindel, not his father Paul Zindel. 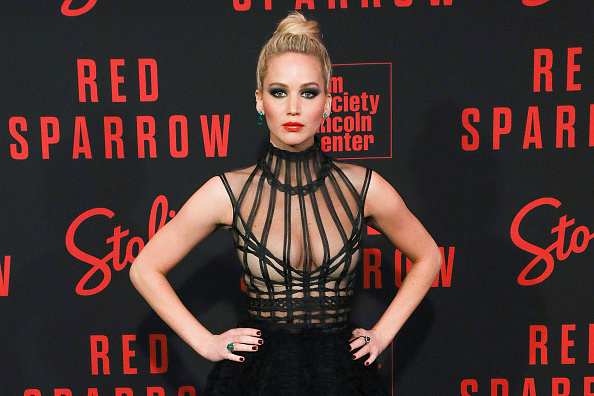 Jennifer Lawrence Reveals the One Movie Role She Was 'Truly Devastated' to Not Get
Next Up: Editor's Pick