Florida Shooting Survivors Are Being Targeted by Conspiracy Theories. Here's What to Know

After surviving a shooting at Marjory Stoneman Douglas High School that left 17 people dead, many of the student survivors have become vocal advocates for gun control and changes in mental health care and school safety.

Just days after they lived through the worst high school shooting in U.S. history, they’re being targeted by conspiracy theories that claim they are paid “crisis actors” involved in a shooting hoax.

Other, more mainstream conservatives are questioning whether the survivors are little more than pawns manipulated by Democrats, gun-control activists and even the FBI.

The conspiracy theories are being promoted by fringe right-wing media outlets and social media accounts. An aide to Florida state Rep. Shawn Harrison was fired on Tuesday after he falsely told a Tampa Bay Times reporter that two Stoneman Douglas students were actually actors “that travel to various crisis when they happen,” using a conspiracy video to back up his claim.

Some claims are threatening to go mainstream because of attention from President Donald Trump’s son. Donald Trump Jr. liked two tweets spreading a conspiracy theory about student David Hogg, accusing him of working with the FBI to criticize the president.

As students, politicians and tech companies continue to respond to the conspiracy theories, here’s what to know about the controversy:

What are the hoax conspiracy theories?

The false conspiracy theories have focused heavily on Marjory Stoneman Douglas student David Hogg, the high school’s student news director who has been one of the most most visible and vocal advocates in the wake of the shooting. Hogg’s father is a former FBI agent — a detail that conspiracy theorists pounced on because the FBI is facing criticism for not investigating tips that were made about the Parkland shooter. President Trump has linked that failure to investigate with the ongoing investigation into Russian interference with the 2016 presidential election.

Postings on numerous right-wing Facebook pages and other social media outlets have also fueled false claims that Hogg is a crisis actor, hired to act as a victim in the wake of a mass tragedy.

That claim and others have been promoted by far-right sites and have spread quickly on social media. The Gateway Pundit, a site that has promoted debunked conspiracy theories about Hillary Clinton in the past, accused Parkland students of plotting with liberal activists “to further anti-Conservative rhetoric and an anti-gun agenda.”

How are Parkland students responding?

“These people saying this is absolutely disturbing. And I am not an actor in any sense, way, shape or form,” Hogg said in an interview with CNN on Tuesday. “I am the son of a former FBI agent, and that is true. But, as such, it is also true that I go to Stoneman Douglas High School, and I was a witness to this. I’m not a crisis actor, I am somebody that had to witness this and live through this.”

“The fact that Donald Trump Jr. liked that post is disgusting to me,” he added.

Emma González told BuzzFeed that she and her classmates having some fun at the expense of the conspiracy theorists.

“It’s actually really funny to us, last night we kept showing the pictures to each other of the actors that we’re supposed to be and could not stop laughing — it was nice, we haven’t had such a good laugh in what feels like years,” she told BuzzFeed. “It just shows how weak the other side’s argument is, like they have to attack the messengers since the message is airtight. Also I’m thankful that there are people out there finding my doppelgänger for me, always wanted to have a party with a room full of people who look like me.”

How are tech companies responding?

Facebook said Wednesday that it is working to remove posts that falsely label Parkland survivors as “crisis actors” working for liberal activists.

YouTube faced criticism for prominently featuring a video that claimed Hogg was a crisis actor. The company said it is working to fix the problem.

“This video should never have appeared in Trending. Because the video contained footage from an authoritative news source, our system misclassified it. As soon as we became aware of the video, we removed it from Trending and from YouTube for violating our policies. We are working to improve our systems moving forward,” a YouTube spokesperson told CNBC.

How are politicians responding to conspiracy theories?

Florida Sen. Marco Rubio called the false “crisis actor” conspiracy theories “the work of a disgusting group of idiots with no sense of decency.”

Florida state Rep. Shawn Harrison — the lawmaker whose aide, Benjamin Kelly, promoted the conspiracy theory — called it an “insensitive and inappropriate allegation” and then fired him. “I am appalled at and strongly denounce his comments about the Parkland students. I am again sorry for any pain this has caused the grieving families of this tragedy,” Harrison said on Twitter.

This has happened before

Conspiracy theories have emerged after past shootings, even though they have been repeatedly debunked. Conspiracy theorists have alleged that the Sandy Hook Elementary School shooting did not happen and argued that the gunman in Las Vegas was joined by other shooters. Both claims are false. 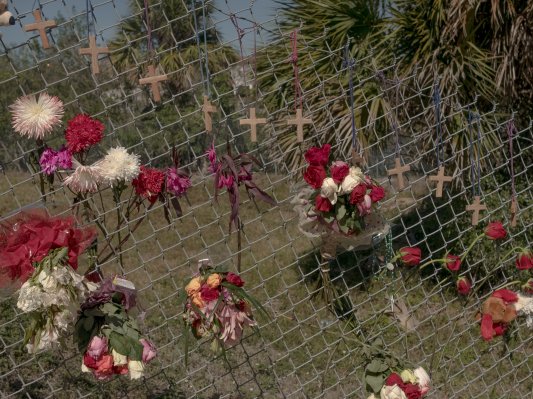 The March For Our Lives Protest Is This Saturday. Here’s Everything to Know
Next Up: Editor's Pick