Skaters from the Olympic Athletes of Russia and the U.S. took different kinds of risk — with dramatically different results.

Some athletes come into an Olympic season playing it safe, hoping to hold on and not slip back to their rivals. While others see the once-in-four-year test as an opportunity to go for broke.

All season, the ladies skaters from the Olympic Athletes of Russia have been setting themselves up as the ones to beat. Training mates Evgenia Medvedeva, 18, and Alina Zagitova, 15, face off in training almost daily, and that constant motivation pushed them to take a risk that is stirring heated discussion in the skating community.

Zagitova skated a dazzling short program on Tuesday night at the Gangneung Ice Arena and set a new record with her score of 82.92. Medvedeva, who has been injured most of the season, skated a routine with less challenging jumps but was able to make up for her lower-scoring elements with high component, or presentation scores that recognize skating skills, musicality and choreography, to finish in second. Canada’s Kaetlyn Osmond finished behind the OAR athletes with a strong skate that earned her a season’s best score.

Zagitova and Medvedeva rose to the top of the standings on the strength of both sheer talent and a controversial strategy of gamesmanship. Under a scoring system in which every skill, every turn and each wave of the arm counts, both skaters are setting new standards for where and how to glean points from an Olympic program. Both left all three of their jumping passes for the second half of their program, which earns them bonus points, something that only one other skater, Kaori Sakamoto from Japan, also did (Sakamoto finished fifth). Traditionally, skaters launch into their most difficult jumps almost as soon as their program starts, to take full advantage of any adrenalin rush to their legs. It’s a risk to backload routines with jumps, when exhaustion kicks in, but for the Russians, it’s a strategy that seems to be paying off. Using that tactic, Zagitova became the current European champion and Grand Prix Final champion, while Medvedeva is a two-time world champion, two-time European champion and two-time Grand Prix Final winner.

For Zagitova, the gamble paid off yet again, with a record-setting new short program score that bested Medvedeva by 1.31 points. “I was very happy when I saw the score, but I did not expect it,” she says. “Now my name will be connected to that record.”

For the three-woman U.S. team, it was a risk of a different kind, and the results weren’t quite as satisfying. Mirai Nagasu, who made history days before by being the first U.S. woman to land a triple axel at the Olympics in the team skating event, made another run at the jump. She managed to get all three and a half revolutions, but fell on the landing, her only error in the entire routine. “It isn’t what I wanted but you can’t always have what you want,” she says. “I just over rotated a little bit and just tried to land forward and it didn’t really work out well today. But I’m so incredibly proud of myself for taking that fall, for taking the risk with the program and getting every element done.”

Ever the technician, her coach Tom Zakrajsek says he saw some hesitation before Nagasu launched into her revolutions. “She actually set it up really well but there was some hesitation from the back outside edge to the initiation of the jump and that is a big no-no on the axel,” he says.

The triple axel is a calculated risk, he says, since it pays off in huge points if Nagasu lands it, as she did in the team event where she collected 10.07 points for it, but can also bring her score down if she doesn’t; with the fall in the short program, she lost more than four points and ended up in ninth place.

Bradie Tennell, the U.S. national champion, also had an uncharacteristic spill at the end of her opening two-jump combination, and ended up in 11th place, while Karen Chen, the 2017 U.S. national champion, dropped her hand down after the first part of her two-jump combination, which prevented her from completing it. The lost points put her in 10th.

“My timing was just a little off; my left arm got a little away from me so I wasn’t able to get the snap,” says Tennell of her fall. “Things happen, we’re all human and we make mistakes but we get up and keep going.”

Tennell had the unenviable position of skating first among the 30 competitors, and admitted that while it wasn’t a factor in her fall, “I’m not fond of skating first; nobody likes to be first out there, right?”

The strategizing by the OAR skaters to maximize points will be on full display again on Thursday night, when the ladies return for the free skate. And the back and forth over how smart, effective or even fair it is will rage on. The long program, which is twice as long as the short program, also usually includes double the number of jumps, which Zagitova also packs into the last half of the program. 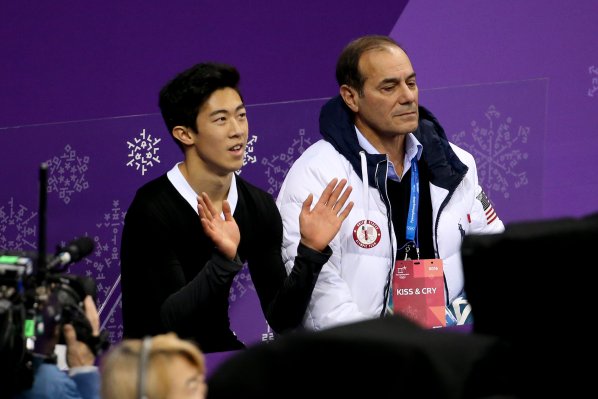 Here's Why It Says 'Kiss & Cry' on Olympic Figure Skating Badges
Next Up: Editor's Pick