It’s the question on everyone’s lips: are Tessa Virtue and Scott Moir dating? The 2018 Winter Olympic gold medalists in ice dancing — and most-decorated figure skaters in Olympic history — put on quite a show during their PyeongChang appearance, executing flawless versions of a passionate Moulin Rouge medley for their free skate and a dramatic Latin short program. But they’ve stayed mum about how that chemistry translates off the ice.

Leave it to Today Show hosts Hoda Kotb and Savannah Guthrie to try to get to the bottom of the mystery. In an interview with the skaters following their win, Kotb and Guthrie came right out with the question, asking about their dating status and calling their chemistry “undeniable.” “Would you guys just give us a little 411 on that situation?” Kotb asked. Virtue and Moir responded with laughter.

“Well, that’s such a compliment that you feel that when you watch us skate,” Virtue gracefully responded. “We absolutely love performing together. We love storytelling, especially with Satine and Christian in the Moulin Rouge! program. That was really close to our hearts. We knew we wanted to skate to that music.”

“Guess mission accomplished,” Moir continued, completing her thought. “That was the story we were telling, so I’m happy that you fell in love with that.” Looks like they’ll be continuing to play coy about where their hearts lie when the skates come off.

And as for their professional future together? “We have to let the dust settle before we make that decision,” Moir noted about their plans going forward. The many mysteries of Virtue and Moir remain alive and well. 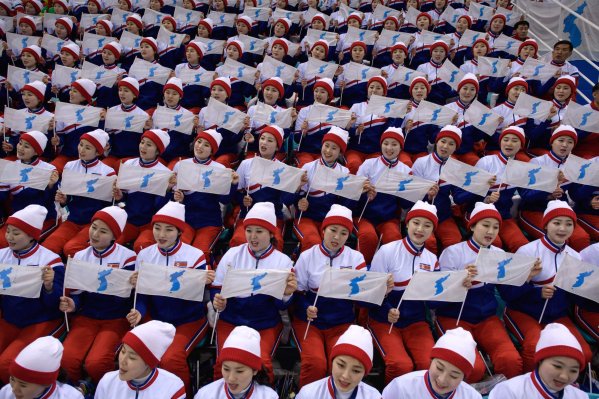 The Olympics Brought North and South Korea Together. But Hope for a Unified Korea Is 'Withering Away'
Next Up: Editor's Pick