Drake is on a quest to be the most-loved rapper in the game. Exhibit A: the music video for “God’s Plan,” his new track that’s sitting pretty atop the Billboard charts for its third week now. When he was filming the video in the Miami area, news quickly spread about his benevolent behavior. We knew he dropped at least $200,000 on scholarships and donations just from those sneak peeks. Turns out it was more like $1 million, a good deed that Drake teased was the “most important thing” he’s ever done in his career.

In the video for “God’s Plan,” released Friday, the 6 God makes a point to show just how much he gave away. “The budget for this video was $996,631.90,” it tells us. “We gave it all away. Don’t tell the label…” (That would be Young Money Entertainment, founded by Lil Wayne, and Cash Money Records.) From handing out literal stacks of cash to a shocked family sitting on a curb to announcing over megaphone that all the shoppers in a grocery store are getting their food for free, Drake comes through like an unexpected angel of generosity, leaving emotional fans in tears in his wake. But he’s having fun while he’s at it: working with his signature “Hotline Bling” moves, Drake does take time for a dance break in a shopping mall and at a school.

The video serves as a kind of early campaign piece for the return of Drake. And this time, he’s leaning fully into his soft side, distributing hugs and grins like candy. “We’re nothing without our mothers, so thank you,” a clip shows him saying to a woman at the end of the video. At least he’s consistent: “I only love my bed and my momma” is one of the most memorable lines in the song. 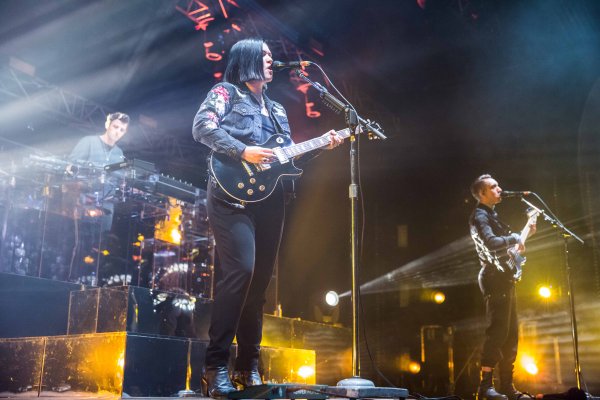 'We’ve All Come a Long Way.' The xx Talks to TIME
Next Up: Editor's Pick