5 Things You Should Know About Olympic Skating Star Vincent Zhou

All eyes were on Vincent Zhou on Thursday when the 17-year-old figure skater from Team USA made history at the 2018 Winter Olympics in PyeongChang, South Korea by becoming the first person to ever land a quadruple lutz during his short program at the Olympics. This is the first Olympic games for the skater, who is the youngest member of Team USA at the PyeongChang Winter Olympics this year. And while Zhou is fairly young, he’s accomplished a lot in his 17 years so far — here’s what you should know about this bona fide skating star.

He’s the son of Chinese immigrants: According to the Chicago Tribune, Vincent’s parents moved from Beijing to California in the early 1990s to attend graduate school. His father is a computer scientist with Google, while his mother worked for Oracle before quitting her Silicon Valley job to help Vincent achieve his goals of becoming a figure skater. As he revealed in an interview with NBC, Vincent is fluent in Mandarin Chinese and attended Chinese school every week until he was 12.

He’s basically a genius: In an interview with Cosmopolitan, Vincent said that he’s always been ahead of the curve when it comes to education. “Throughout my childhood, [my parents] educated me beyond the regular U.S. education system; in 2nd grade I was learning from 6th grade Singaporean math textbooks,” he said. “The way that Asian-Americans are brought up, we often go to very competitive high schools and end up in Ivy League colleges… if we can’t do that, we’re disowned,” he joked. Vincent’s studies paid off — not only did he skip a few grades as a “gifted and talented student” while at the Capistrano Connections Academy, he even graduated ahead of his age group at the tender age of 16.

He got his start on the ice at the age of 3: While he didn’t begin formal training in figure skating until he was a little older, Vincent went ice skating for the first time when he was 3 years old. In an interview with US Figure Skating, Vincent shared that his father took him to a local ice rink and encouraged him to get over his fear of being on the ice by holding his hand as they skated.

He could have a side hustle as a comedian: In an interview with US Figure Skating, Vincent revealed that he would tell a knock-knock joke every time he was on the ice as a young skater. He also said that he loves “a good, high-quality meme” and said that the funniest people he knows are ice dancers Charlie White and Ben Agosto.

He’s got well-rounded interests outside of the world of figure skating: Vincent shared with Cosmopolitan that he enjoys writing poetry in his spare time, noting that “it’s a good way to vent or express some stress or whatever I’m feeling.” When Vincent isn’t training or writing poetry, you can also find him on a hike; because he trains for part of the year in Colorado, he’s been taking advantage of their many hiking trails. Vincent also shared with NBC that his dream “would be to do a difficult hike in Rocky Mountain National Park.” 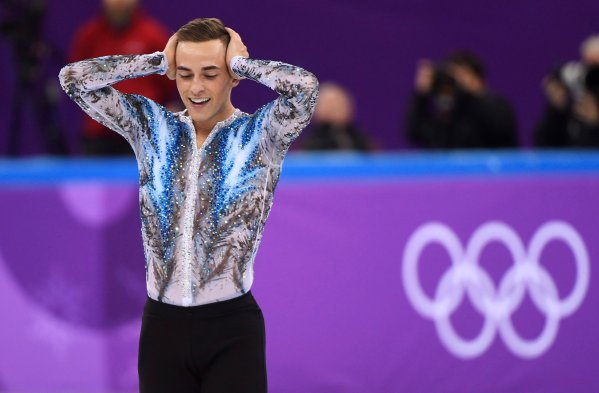 How Adam Rippon Found His Voice and Became America's New Star
Next Up: Editor's Pick