Why People Are Swimming in Freezing Water

Before an ice-swimming competition in the Czech Republic, organizers carved a 108-ft.-long pool out of a frozen pond
Radek Kalhous
By Jamie Ducharme

Forget dipping your toe in the deep end. In countries around the world, intrepid swimmers of all ages plunge into ice-cold waters for a thrill that can feel as sharp as daggers–and bragging rights that last all winter.

Welcome to the fun and frigid world of cold-water swimming. The hobby is nothing new. It’s been around for centuries in chilly climes such as Russia and Finland, and people have been crossing the notoriously frosty, 21-mile-long English Channel without wet suits since at least the 1800s. The Coney Island Polar Bear Club hosted its first U.S. ocean dip in 1903. And while polar plunges have become relatively common, some of these swims are not for the faint of heart. Only 11 people in recorded history, for example, have completed the so-called Ice Zero: a mile-long swim in freezing water, held in places such as Antarctica, Russia and Northern Europe.

Communal cold-water plunges are a great way to build camaraderie–and chase better health. Jitka Tauferova, 76, belongs to a swimming club in the Czech Republic (as does everyone photographed on these pages). She says she has not gotten sick since she began cold-water swimming. “The last time I had flu was 25 years ago,” she says. “My back pain disappeared. Better blood circulation improves healing broken bones, and my heart is like a hammer. I feel great.”

She and like-minded swimmers may be onto something. Research has shown that swimming–the kind done in normal-temperature water, at least–is one of the best full-body workouts. It’s also ideal for older people and those with pain; swimming is not a weight-bearing activity, but it still delivers all the benefits of traditional aerobics, from strengthening the heart to brightening mood.

Scant research has explored the practice of swimming in cold water, but there is some evidence that it invigorates the body in unique ways. In a February case report published in the BMJ, a young man desperate for relief from chronic nerve pain went for a minute-long swim in chilly 51°F water. His pain immediately vanished–and didn’t return. “When I came out of the water, I realized the neuropathic pain had gone away,” he told researchers, who believe the shock of cold water could have somehow disrupted pain patterns in his body. “I couldn’t believe it.” Another study, in 2008, suggested that taking cold showers could ease depression symptoms and pain, possibly by raising levels of mood-regulating and painkilling chemicals in the blood and brain. A small 2011 study also found that when soccer players immersed themselves in cold water for five minutes after a game, they reported less fatigue and recovered better in the following days than athletes who didn’t take a cold plunge.

Of course, diving into frosty water comes with some real health risks too. When you enter very cold water, stress-hormone production increases and blood pressure rises, says Dr. Philip Green, a cardiologist at NewYork-Presbyterian Hospital. In healthy people, these stress responses rarely pose a threat, and they’re responsible for the punchy thrill you get when you take a cold plunge. But in people who have a diagnosed or underlying heart condition, they can lead to dangerous cardiovascular problems, Green says.

Even for healthy people, extreme cold can be treacherous, says Robert Coker, a professor of biology, clinical nutrition and exercise physiology at the University of Alaska Fairbanks and a faculty member at the Institute of Arctic Biology. “It really has a dramatic physiological impact on you, if you’re not used to it,” Coker says. “When you fall in the water and it’s freezing, the first thing you do is kind of take a big gasp of air, and that causes you to hyperventilate. Your heart rate goes up.”

There’s also the risk of hypothermia, which can set in after 15 to 30 minutes in freezing water, Coker says. Loss of consciousness, disorientation and a drop in muscle function of up to 25% can occur even before that. “That could be the difference in being able to get yourself back up over the ice or not,” Coker says.

For these reasons, cold-water swimmers typically acclimate to the extreme temperatures by training in progressively chillier waters. Ice-swimming competitions are also often time-limited to protect against hypothermia.

The dangers aren’t enough to scare away people who love the adrenaline rush–including Ram Barkai, 60, who in 2009 co-founded the International Ice Swimming Association and is campaigning to get the sport into the Olympics.”It’s a sea of paradox: you dive into the ice, and it feels like you’re jumping into fire,” Barkai says. “It is beautiful, but deadly. It is hard and debilitating, but invigorating.”

Although Barkai must travel to places like Russia and Antarctica to swim in ice–his native South Africa is too temperate–he swims in cold water regularly. The high, he says, is enough to make him endure hazards like biting his frozen tongue or losing finger sensation for months at a time.

“You feel alive,” Barkai says. “Everything feels great. You feel healthy. And you didn’t have to take any drugs or drink a bottle of whiskey.” 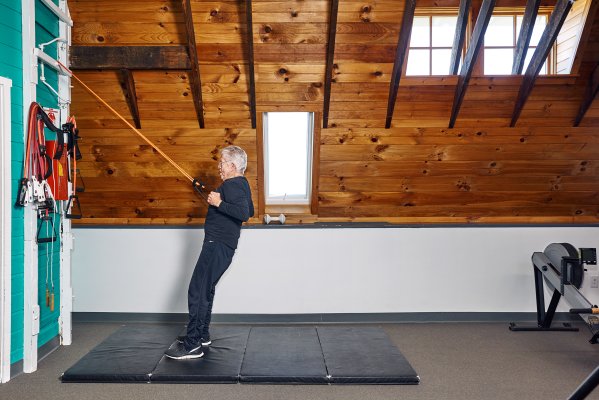 Inside One Couple’s Experimental Treatment to Battle Alzheimer’s Disease
Next Up: Editor's Pick