Mikaela Shiffrin Is Going for Another Olympic Gold Medal. Here's How the Alpine Skiing Events Differ

U.S. Olympic skier Mikaela Shiffrin clinched a gold medal in the giant slalom race on Thursday in PyeongChang, South Korea. On Friday, she fell short of medaling in the slalom, typically her strongest event. But she will go for gold again before the Winter Olympics are over, competing in the alpine combined race on Friday and possibly the downhill on Wednesday.

“I’ve had a lot of people tell me, ‘Yeah, sure, you’re good at slalom, but wait till you get to the real events like downhill or super-G.’ I don’t like hearing that,” Shiffrin, 22, told the New York Times before the Olympics, adding that her goal was to “become not just the best slalom skier in the world, but the best skier in the world. Period.”

That’s impressive in large part because of how different the alpine skiing disciplines are. A gold-medal performance in one does not necessarily translate to such skill in another.

The four disciplines of alpine skiing competition are slalom, giant slalom, super giant slalom (super-G) and downhill. (A fifth event — the alpine combined — is, as its name suggests, a race that combines downhill and slalom.) In each discipline, the goal is to cross the finish line in less time than other competitors, but they require different techniques.

According to the rules and format of Olympic alpine skiing, the downhill and super-G are both speed events. “The competitors generate high speeds because the course is designed with longer runs and greater distances between the gates,” the format guide states. U.S. skier Lindsey Vonn — who is known for her speed — won an Olympic gold medal in the downhill event and a bronze medal in the super-G event at the 2010 Winter Olympics in Vancouver.

Meanwhile, the giant slalom and slalom are considered “technical events” because the courses involve more gates and turns. Shiffrin won a gold medal in the slalom at the 2014 Olympics in Sochi.

Here’s what to know about the difference between the alpine skiing disciplines:

“A Downhill is characterised by the six components of technique, courage, speed, risk, physical condition and judgement,” according to the competition rules of the International Ski Federation.

While skiers participate in training runs for the downhill event, the official competition is based on only one run. The course, which is longer than the others, includes fewer turns and has the highest vertical drop, which is what makes downhill the fastest alpine skiing event. Downhill skiers reach speeds of 80 to 95 miles per hour.

The slalom competition consists of two runs. A skier’s score is based on the combined time of both runs.

The gates on a slalom course are the closest together, requiring skiers to zig and zag quickly, making turns with rapid speed. If a skier misses a gate, he or she will be disqualified.

Like the slalom event, the giant slalom consists of two runs, after which a skier’s times are combined.

Like the downhill event, the super-G is decided by just one run. It has more gates than the downhill course, but fewer than in slalom or giant slalom.

Because the super-G is a speed event, it has a higher vertical drop than either the slalom or giant slalom courses.

Both men and women already competed in the super-G race. 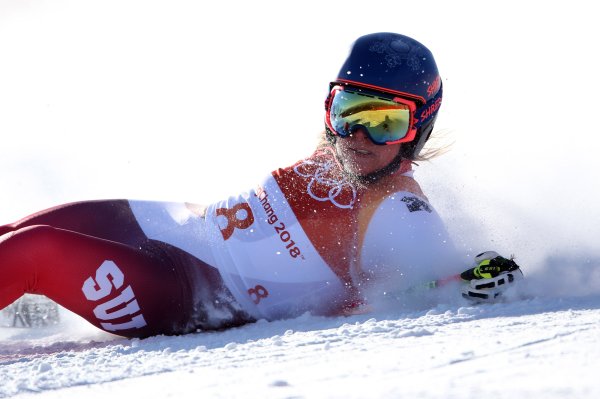 See That Moment an Olympic Skier Crashed Into a Photographer and Lived to Tell the Tale
Next Up: Editor's Pick