For a creature of routine like American skiing superstar Mikaela Shiffrin, the waiting and waiting for her Olympics racing schedule to start was borderline torturous. She had to find ways to keep herself relaxed as bad weather kept delaying her events. She passed the time by watching episodes of Blue Bloods, the CBS cop drama starring Tom Selleck, and her family’s favorite TV show. She texted with her sports psychologist, who urged her to stay patient and not fret about things she couldn’t control. The night before her giant slalom race on Thursday in South Korea — Wednesday evening New York time — older brother Taylor, on hand to support his sister, danced around a living room with Mikaela. “It was just like we are all together back in Colorado, goofing around and having fun,” says Taylor. “We knew it was best to keep her mind off the event.”

All the shimmying and texting and Tom Selleck paid off; Selleck, and his still excellent mustache, should take a bow for entering Olympic lore. On a sun-baked day in the mountains of South Korea, Shiffrin, 22, the reigning World Cup all-around skiing champion and current top women’s skier in the world, won her first race of the PyeongChang 2018 Winter Olympics Games, taking gold in the giant slalom Thursday afternoon at the Yongpyong Alpine Centre. The race was supposed to be be held on Monday, but wind gusts pushed the contest back until Thursday.

Shiffrin won’t have much time to celebrate. Her strongest event, the slalom, goes off on Friday (Thursday night in the U.S.; it was originally scheduled for Tuesday night). With a win in the slalom, Shiffrin would become the first American ski racer, woman or man, to own three Olympic gold medals. (Four years ago, she won the slalom gold in Sochi at 18 years old, becoming the youngest Olympian to ever win that race).

While Shiffrin has won four World Cup discipline titles in slalom, giant slalom — a faster technical race with less frequent turns than slalom — has proven tougher for her to master. So this gold is all that sweeter — and surprising. “Giant slalom is something I have a love-hate relationship with,” Shiffrin says. “It’s more difficult for me to find a good rhythm in GS, so I need to train it a lot, I need to be in a good mood, I need to be aggressive. I’m just starting to find some connection with that this year. To do that today was just amazing.”

Plus, for someone pursuing multiple golds like Shiffrin, a first win lifts a serious burden. “It’s really nice to know that no matter what I do, from today on, I will walk away from these Olympics with something,” she says. “I knew I could win medals in multiple disciplines, but I also knew I could have nothing, I have something now and that’s great. I can ski really for myself.”

The weather delays, however, have likely derailed her plans to pursue five Olympic medals; Shiffrin’s mother and coach, Eileen, says her daughter won’t race in Saturday’s Super-G event. A Super-G start would require completing three races in three days, a fatiguing undertaking. Eileen wants her daughter to rest, and start her training for next week’s downhill and combined events.

Shiffrin still has a chance, however, to break Janica Kostelic’s record for most gold medals won by a female alpine racer at a single Olympics. The Croatian skier took three golds at the 2002 Salt Lake City Games. In short, Shiffrin’s pursuit of the Olympic skiing record book compares to what Michael Phelps accomplished in swimming.

Although the delays put a mental strain on Shiffrin, her preparation was on point. When fellow racer Sofia Goggia, of Italy, saw one of Shiffrin’s giant-slalom training runs earlier this week, her jaw dropped. The gold, Goggia told someone, was Shiffrin’s.

On the morning of the giant slalom race, her nerves didn’t feel frayed. “I was able to eat my breakfast,” says Shiffrin, “which normally on race day, is not so easy for me to do.” (Last season in particular, Shiffrin developed a nasty habit of throwing up before her races). Even though she trailed by .20 seconds after her first run, Shiffrin felt good just to be racing. “Yeah, you don’t even know!” Shiffin said after that run, with a laugh. “Last night I was like, are we ever going to race?” Weather delays can benefit a skier with Shiffrin’s skills.

Temperate conditions minimize the impact of luck; in unpredictable conditions, a sudden wind gust can propel an inferior racer forward. “It’s fair today, which is really, really important, especially at the Olympics,” Shiffrin said while the North Korean cheering squad sang its melodies from the stands at the bottom of the mountain. She felt loose in her first run, but not completely satisfied. “I feel like I can go a little bit harder,” Shiffrin said. “There’s nothing to hold back for in the second run. The nice thing about the Olympics, is you don’t hold back.”

Between runs, her mother reinforced this message: you’re skiing too well not to go for it. But some doubt crept in. “There were moments that were like, I don’t know if I’m good enough to do this,” Shiffrin says. “And there were moments that were like, ‘who cares, you’ve got to try, we’re here.'” Shiffrin, who even as a middle schooler at the Burke Mountain Academy in Vermont appreciated the recuperative powers of sleep, tried napping between runs. Shiffrin didn’t completely doze off, she said after the race, but the relaxation helped.

The second-to-last racer in contention to go off, Shiffrin dug deep at the top: she needed to beat the top combined time of 2:20:41, set by Ragnhild Mowinckel of Norway. She sizzled and swerved, building speed and a lead: though she slowed a bit at the bottom, Shiffrin took the top spot, by .39 seconds, and clinched at least a silver. If Italy’s Manuela Moelgg, the last racer, couldn’t keep up, Shiffrin would win the gold.

As Moelgg moved down the mountain, she kept losing pace. Shiffrin’s father Jeff, who first put his daughter on skis when she was around two, put his hands on his hat in the stands. “Oh my God!” he said. He knew Mikaela locked it up. “This is validation for all her effort,” a joyous Jeff said afterwards. His daughter’s famous for training longer and harder than her competitors, and spending hours breaking down video, like any obsessive coach. “That’s what matters!”

Another key to Shiffrin’s success: she never let the Olympics psych her out. During an interview at the condo she shares with her parents in Avon, Colorado — near Vail — in the fall, she was asked to show off her gold medal from Sochi. One problem: she had brought it to a media event in Park City, Utah, and didn’t pack it on her carry-on back home. What Olympic champion, in their right mind, would entrust a gold medal to the airlines in checked baggage?

The medal made it home, and on that fall morning it was stuffed into a huge red duffel bag, out in the garage. Later, the hardware just sat on her kitchen table, near a collection of candy wrappers. She often keeps it wrapped in a sock, rather than displaying it in a case. Her philosophy: don’t rest on past laurels. Or put too much stock in any trophy. “I’m not taking pictures with it every day,” Shiffrin said. “It’s not the most valuable part of my life.”

Still, it’s now time for Shiffrin to get more socks. 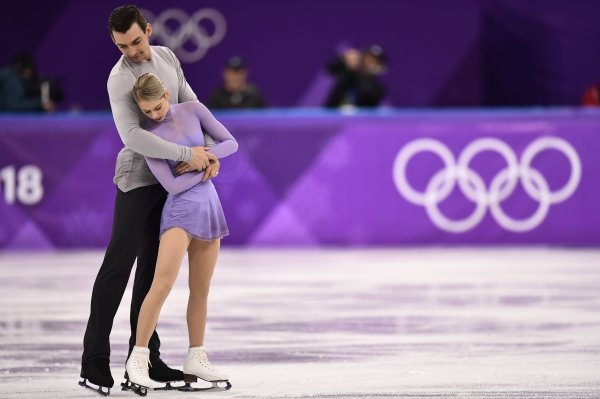