Demonstrators attend the Women's March "Power to the Polls" voter registration tour launch at Sam Boyd Stadium on January 21, 2018 in Las Vegas, Nevada.
Ethan Miller—Getty Images
Ideas
By Jill Filipovic
Filipovic is a journalist and lawyer, and the author of OK BOOMER, LET'S TALK: How My Generation Got Left Behind and The H-Spot: The Feminist Pursuit of Happiness. She writes at jill.substack.com.

A little more than a year ago, just before the 2016 presidential election, feminists had reason to cheer. After a decade of organizing online and off, with feminist blogs growing in popularity and giving way to a new generation of feminist writers and commentators, feminism, it seemed, was simultaneously ubiquitous and cool. Feminist writers graduated from bloggers to paid professionals, some of our names dotting the pages of legacy publications, others running large feminist-minded new media sites. The biggest stars of pop culture, from Taylor Swift to Beyoncé to Lena Dunham, took up the feminist mantle. This was the culture piece that was supposed to dovetail with the political one, delivering us, for the first time in more than 200 years, a female president of the United States.

We all know how that turned out. A lot has changed in America. We seem to be more divided, and more steadfast in our own views and biases, than ever before. Our discourse is meaner, uglier, crasser – right up to the president’s childish, indignant tweets. Half the country is apparently OK with foreign interference in our elections, deporting our neighbors and the breakdown of basic political and social norms. For feminists, especially younger ones who have watched a movement in perpetual upswing, 2017 was catastrophic, and we are, more than we’ve been in a decade, on the defensive.

But we’re also playing a kind of wild, unruly offense that seems unlikely to have burst forth without the catalyst of Donald Trump. Women are demanding accountability for sexual harassment and assault — not just telling anonymized stories, but naming names and exacting penalties. #MeToo went from story-sharing to firing frenzy in a whiplash manner, but feminists are still concerned about its almost inevitable backlash.

We’re also exhilarated. Last year was dark, but this unbridled, fiery thing is a burning bright spot. We need it.

The right has claimed victory in Donald Trump, boasting not just an electoral win but a cultural one – a vindication, especially, of sexism and racism. Many on the left blamed “identity politics” – shorthand for those who advocate for the rights of women and people of color – for Democrats losing the election, and insisted that progressives should refocus their energies on the white working class men who ushered Mr. Trump into office.

This increasingly loud argument from the left, voiced by an unlikely fraternity of social-media-savvy socialists and white centrists, demands that women consider class struggle before gender struggle (and from the socialist side, insists that sexism is fundamentally about class anyway, and empowering the worker – the working man, usually – will, somehow, mean an end to the misogyny that has pervaded nearly every society, including pre-capitalist ones). And of course, most of the loudest voices demanding a focus on white working class men are white men themselves; so too are the leaders that they champion. The “focus on class struggle first” falls conveniently in line with traditional feminine behavior of putting others’ needs before your own — always eating last.

More insidiously, it can mean having your rights compromised in the name of the greater good. Last April, the Democratic National Committee Chair, Tom Perez, told The Wall Street Journal that Democrats shouldn’t “demand fealty” from candidates on abortion rights; women’s rights groups quickly cried foul, and he walked those comments back, deeming abortion rights “not negotiable.” But he subsequently met with members of Democrats for Life, suggesting that abortion rights may, in fact, be quite negotiable, for the right price. House Minority Leader Nancy Pelosi doubled down, suggesting that those who would restrict a woman’s fundamental right to decide for herself when and if to have children are, in fact, welcome in the Democratic Party – not just as voters, but as policy-makers.

For feminists, this all felt very familiar: Ladies, wait your turn.

Luckily, that Trump-reactive turn away from fundamental feminist values — that women get to determine what happens to our own bodies, whether that involves pregnancy or a groping hand — seems untenable in the face of today’s #MeToo movement. Less than a year after Perez’s and Pelosi’s wishy-washy women’s rights comments, anti-abortion Democratic incumbents are being challenged in primaries, and prominent party members are backing their opponents.

This resurgent (if not always totally organized) feminism is also a welcome counter to the narcissism dressed up as female empowerment that characterized the Trump administration’s first few months. Watching the administration take shape and the media buzz it created, it seemed like a kind of individualist Randian right-wing feminism had found new legs, as some of the most newly-prominent and influential women in the country were women whose politics are bad for other women. The women of Fox News, long happy to push a misogynist political agenda, blew the whistle on pervasive sexual harassment at their company – becoming mouthpieces for a leading feminist issue, but only insofar as it impacted their careers.

Kellyanne Conway, who has slammed feminism for being “anti-male” and “pro-abortion,” also complained about being on the receiving end of sexist critique and said that she embraced “an individual feminism” that’s all about women making their own choices. Her brand of feminism was individualistic enough that she could comfortably work for a man with a long track record of misogyny. That’s her “choice,” after all, its impact on other women be damned. And Ivanka Trump used her status as First Daughter to hawk a feminist-ish book about Women Who Work, where she had little to offer other than the usual corporate clichés and a few throwaway lines about the value of paid parental leave – an issue she promised to champion from her influential perch in the White House, but has done little on until recently.

This co-opting of feminism away from a broad political movement aiming to improve conditions for all women and toward a depoliticized “me first” vision of women’s rights put feminists in a tough spot. This was especially true coming at the same moment that many of our male comrades on the left seemed more interested in the struggles of white men than in equality overall.

In the year after the election, feminists walked a rocky path. We tried to determine how best to keep pushing for leftward movement, including on the class issues that are so prominent right now, without making “class” synonymous with “white working-class men.” After all, the working class in America is disproportionately brown and black, not something that you’d assume if you only listened to the loudest talking heads. Gender equality also requires female representation and women’s rights to put ourselves first and to seek power – great gender taboos, even on the left – without careening down into a politically neutered “feminism” that’s only about women’s empowerment insofar as the person championing it is a woman who wants power.

The broad, raucous conversation on sexual harassment and violence helped us cut a clearer path. Celebrity women might have made initial headlines, but unlike the Ivankas and Kellyannes of the #MeFirst Trump White House, the women of #MeToo have lifted their sisters up. Domestic and farmworkers declared their solidarity with the famous and moneyed women harassed and assaulted by Harvey Weinstein, and celebrity women led by a diverse coalition met that generosity of spirit with cash-money, starting a legal assistance fund for vulnerable women facing harassment.

And so there remain a great many reasons to take heart, even in Trump’s America. Millions of women marched around the world in opposition to Mr. Trump, and we continue to show up – to science marches, at airports on behalf of immigrants and on street corners in Georgia to turn out voters for a Democrat. We are running for office in record numbers. And we are speaking up without apology or fear of being strident, shrewish or boisterous. We have so little left to lose — who cares if you think we’re hysterical mouthy broads? Maybe we are the witches you feared all along. Deal with it.

Victory in the feminist fight doesn’t look like nearly as foregone a conclusion as it did at the end of 2016. We are fractured and limping, and unclear on who we can count as allies or opponents. But we’re far from down for the count. 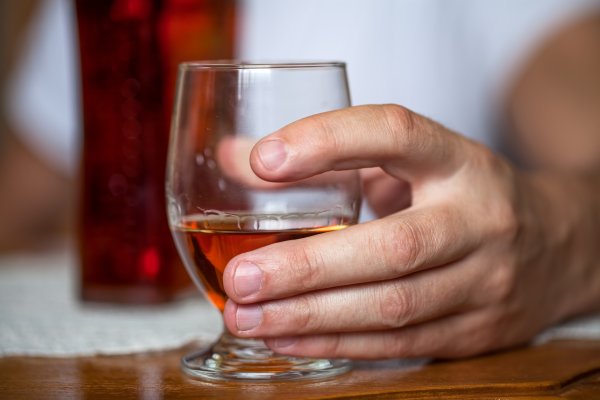 Could We ‘Turn Off’ the Urge to Drink?
Next Up: Editor's Pick