The History Behind 5 of New Orleans' Favorite Mardi Gras Traditions

A person walks among beads during a parade on Feb. 17, 2017, in New Orleans.
The Washington Post / Getty Images
By Olivia B. Waxman

In the Christian calendar, Fat Tuesday or Shrove Tuesday, the day before the start of Lent on Ash Wednesday, is a day to feast before the weeks-long fast that ends with Easter. While it’s many cities celebrate that last chance to party, which falls this Tuesday, no city is more famous for Mardi Gras — “Fat Tuesday” in French — than New Orleans.

And, though the Mardi Gras festivities in New Orleans originated in this Christian tradition, today the celebration is better known as a day for people of all faiths, races, and ethnicities to come together at the parades, eat great food, and compete to catch beads, doubloons and other throws from the people wearing masks on the floats parading down the streets.

Here’s an introduction to the history behind some of those popular traditions.

This term for the New Orleans clubs that organize the Mardi Gras festivities was coined by The Mystick Krewe of Comus, the group that put on the first parade in the city with themed floats — the model for future parades — in 1857. They started the tradition of wearing masks and carrying torches, known as flambeaux, to light the evening revelries. The organizers came from Mobile, Ala., which had been hosting similar festivities ever since French-Canadian explorer Pierre Le Moyne d’Iberville threw a party when he landed in the Gulf Coast city (which he called Point du Mardi Gras) on Fat Tuesday in 1699.

Though the krewes’ public parades meant the festivities could be seen by the general public, that didn’t mean anybody could participate in the clubs or attend the balls they held. Membership to five of the earliest clubs — Comus, Momus, Twelfth Night, Rex and Proteus — had been mostly closed to all but the moneyed elites. Not coincidentally, the number of these groups ballooned in the first half of the 20th century, as the populations left out formed their own: Italians, Germans, the Irish, women. African-Americans formed Zulu, the krewe famous for starting the tradition of handing coconuts in 1910 because they were less expensive than beads.

Comus stopped parading in 1991, in response to a bill requiring the krewes to integrate.

The Rex Organization — the group founded in 1872 that’s also famous for starting the tradition of naming a parading Carnival King — claims credit for the purple, green and gold color scheme now associated with Mardi Grass. That was the color-scheme of their 1892 “Symbolism of Colors” parade, and the three shades are said to symbolize justice, faith and power, respectively.

Masks and costumes have been associated with Shrove Tuesday celebrations for centuries. And even today of the masks commonly seen in New Orleans on Mardi Gras are the same types popularized by the two-to-three-week-long Carnivale in Venice that culminates with Fat Tuesday. But masking and costume-wearing in New Orleans also has a specifically American history, as it was another way for revelers who were officially excluded from the festivities to join in, by concealing their identities.

This phenomenon was particularly pronounced during the Jim Crow era of the early 20th century. For example, the African-American men now known as Mardi Gras Indians first paraded down the city’s back streets in Native American costumes, in a nod to Native Americans who took in and protected runaway slaves. Another poignant example, according to Kim Marie Vaz’s The ‘Baby Dolls‘: Breaking the Race and Gender Barriers of the New Orleans Mardi Gras Tradition, can be found in the African-American prostitutes who dressed up as “Baby Dolls” — a persona chosen because that’s what male clients called them — in hopes that the costumes would help them land work at a time when sex work was racially restricted.

These days, the Mardi Gras tradition has earned a special exemption from the Louisiana law that generally bans concealing or disguising one’s face in public.

For your security, we've sent a confirmation email to the address you entered. Click the link to confirm your subscription and begin receiving our newsletters. If you don't get the confirmation within 10 minutes, please check your spam folder.
Float riders toss beads, cups and doubloons to fans and revelers in the 2013 Krewe of Bacchus Mardi Gras Parade on Feb. 10, 2013, in New Orleans
Skip Bolen—Getty Images

The throwing of beads and fake jewels, from parade floats to those watching down below, is thought to have started in the late 19th century, when a carnival king threw fake strands of gems and rings to his “loyal subjects” sometime in the 1890s. By the early 1920s, one of the Krewes, probably Rex, started regularly throwing strands of glass Czech beads, a precursor to the plastic beads seen today.

Other “throws” — such as “doubloons” marked with the names of the krewes that make them — followed after.

Recently, during a clean-up project, New Orleans excavated more than 45 tons of beads from its storm drains.

Likely one of the many Carnival traditions brought over by the French settlers who landed in North America, this cake with a baby Jesus figurine baked inside is a symbol of the Epiphany, the day when the three Kings brought gifts to the baby Jesus.

The round cake, which nowadays comes decked out in green, gold and purple icing, dates back to the Middle Ages when European Christians feasted before the Lenten fast. Like many Christian folk traditions, it may originally have had pagan origins. During Saturnalia, the ancient Roman winter solstice celebration of the deity Saturn, the person who found a special item hidden in a cake would be “king of the day,” according to the Larousse Gastronomique culinary encyclopedia.

But, as NPR has reported, the precise reason behind the tiny baby figure in the cake may be a little bit more down-to-earth: it was a surplus supply of French porcelain dollhouse figures, chanced upon by a New Orleans baker in the 1940s, that first gave the cake that local spin. 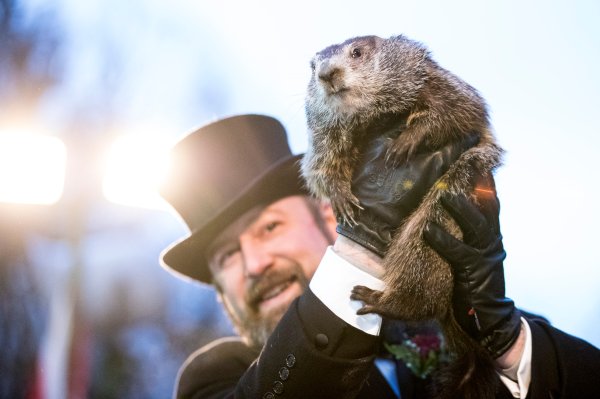 Groundhog Day Has Come Again and the Internet Has Feelings
Next Up: Editor's Pick