Jamie Anderson has hugged trees before competitions, and carries bark in her travel bag. She burns incense in her hotel rooms. The American snowboarding star grew up in Lake Tahoe, Calif., homeschooled alongside seven siblings by her mother Lauren; mom believed that kids didn’t belong cooped up in class, but should be free to roam the mountains and woods and learn the book stuff on their own time. “It was about connecting with the universe,” says Anderson’s older brother Luke, 33, “and going with the flow.”

She does yoga, and has said that her purpose is to find consciousness. She brings a pharmacy full of herbal remedies to events. The laid-back Californian has called herself a “peaceful warrior,” balancing the need to crush her opponents with inner calm, and a smile. “I consider myself an old hippie for sure,” Anderson’s father, Joey, a retired firefighter who grew up in the Bay Area in the 1960s tells TIME. “But Jamie’s a serious hippie.”

Anderson’s at one with her spirit, and on Monday afternoon at the Phoenix Snow Park in Bongpyeong, South Korea, she became a two-time Olympic champ. She cruised to another gold medal in the slopestyle competition, thanks to an error-free run; treacherous winds messed with the tricks of most riders. With her second gold, Anderson — who four years ago won the inaugural Olympic slopestyle event in Sochi — is now the first woman to win two Olympic gold medals in snowboard.

Controversy did overshadow the women’s slopestyle, as some riders insisted that, given the gusting winds, the event should have been postponed. Riders repeatedly wiped out, banging their bodies against the snow after sailing and twisting off steep ramps. Just five of the 25 athletes in the competition completed their first run. “I don’t it think it should have been run at all,” says Norwegian rider Silje Norendal. She labeled the decision to go forward “crazy” and “sad.” Women’s slopestyle missed a rare chance to tout its talent to the world. “What we were able to show today was not good at all,” says Norendal.

Olympic officials did cancel the giant slalom alpine ski race on Monday, leading Norendal to suggest that that FIS, the international governing body for both skiing and snowboarding, gave the skiers preferential treatment. “When it’s alpine, they have a higher status, and they really want a good show,” says Norendal. “I feel like we’re definitely coming in second.” Giant slalom doesn’t even count as a speed event in ski racing. Meanwhile, snowboarders soar to the edge of insanity. Officials sacrificed safety to avoid a cancellation, some riders suggested. “The slalom today, I know it’s unfair if it’s windy,” says Norendal. “But they can’t die. We can actually get super hurt.”

Luckily, no one did. Anderson argued for holding the event, which was delayed for over an hour due to the weather. “It’s not like what we’re doing is safe anyhow,” says Anderson. Knowing so many riders in front of her were falling, Anderson dialed back her game plan, and even made a midair decision to flip once, not twice, off one jump. “I’m not extremely proud of my run,” she says. It was the kind was routine you’d find in a qualifying round; the riders save their best of the finals. Olympic viewers saw the junior varsity.

Still, her gold medal shines. Anderson had to fight injuries — both physical and mental — to earn her second Olympic title. Since Sochi, Anderson’s witnessed an influx of younger riders executing more difficult tricks. Their talent messed with with her head. “I was like really afraid,” says Anderson. “I was like oh my gosh, I don’t know if I’m going to keep with these young bucks.”

Incense and bark helped her stop stressing. Anderson’s always been a free-spirit, thanks largely to her upbringing. Her mother Lauren earned a teaching degree, then decided she’d rather instruct her children herself. “I wanted them to run free like little lambs,” Lauren, who during the event was wearing a USA beanie with “MOM” stitched in the wool, tells TIME. When Anderson was about 12, the spent a few days in junior high. Her father (wool hat: DAD) recalls her laying on the couch one day, after the final bell. “Dad,” she told him. “School sucks.”

Read More: All the Medals the U.S. Has Won in the 2018 Winter Olympics

The mountain serves as her classroom. She’d beat the boys in BMX racing, and battled older sisters Joanie, 31, and Stacie, 28, on snowboards. The sisters constantly one-upped each other with new tricks. “She knew how to push buttons,” says Joanie, who along with Jamie won X-Games gold in 2007. “She wasn’t about to be lost in the mix.” Or as younger brother Joey, 23, puts it: “she’s a f–king boss, man.”

Anderson brings therapeutic accoutrements on road trips. “I have like a little altar set up at every hotel,” Anderson says. “It’s pretty sweet.” For the Olympics, she packed crystals — smoky quartz and clear quartz — a piece of bark, seed from a Hawaiian temple, and various essential oils. She brought frankincense and lavender to the mountain for her Olympic coronation. “I knew she had a little bit of a gypsy personality,” says Anderson’s boyfriend, Canadian Olympic snowboarder Tyler Nicholson. But when they started dating around three years ago, Nicholson was surprised she traveled like a healer. He’s since warmed up to her habits. “She owns it,” he says.

Plus, finding consciousness yields one hell of a result: making Olympic history. 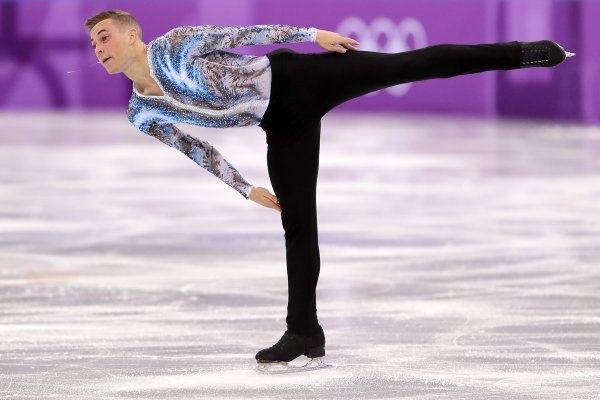 What Adam Rippon Was Thinking During His Olympic Debut
Next Up: Editor's Pick