The Philadelphia Eagles celebrated their Super Bowl victory with a parade that attracted an estimated millions of fans on Thursday, but for the Internet, there were two that stood out from the crowd.

After Twitter user Shamus Clancy tweeted out the iconic picture of a World War II sailor kissing a nurse on V-J Day with the caption, “me and your girl on Broad Street,” fellow Philly local Ashley Suder swooped in to offer him an opportunity to reenact the storied moment.

“If you’re looking for a girl to recreate this during the parade I’m here for it,” she replied.

Soon after, a viral photo for the ages was born.

Clancy later shared the entirety of their online interaction alongside the perfectly reproduced shot. “The Philadelphia Eagles Love Story, a three act play,” he wrote.

Due to the controversial history of the older photo—many view the photo as depicting sexual assault—some even saw Clancy and Suder’s recreation as better than the original. “That’s about a thousand times sweeter then the story behind the original photo,” replied user @Brendanekstrom. 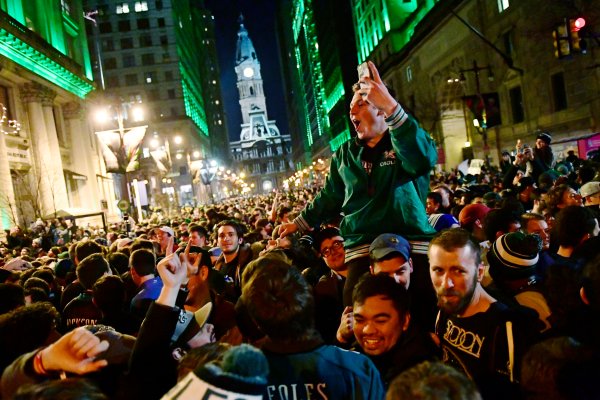 Here's What Philadelphia Looks Like After the Eagles' Super Bowl Victory
Next Up: Editor's Pick