President Donald Trump’s son Eric Trump took to Twitter on Friday to share something he described as “#HotOffThePress” — an internal Trump Organization promotional publication with a cover image of the Trump International Hotel in Washington, D.C.

The Trump Organiation, the President’s eponymous company of which Eric Trump is executive vice president, told the Associated Press that “the publication is a promotional piece developed for our owners, members and guests. It is not intended for general public distribution.”

The Trump International Hotel, which sits less than a mile from the White House, has become a popular destination for lobbyists, diplomats and others traversing the halls of power during the Trump presidency. It has also been the subject of lawsuits arguing that the hotel puts Trump in violation of the emoluments clause of the Constitution because the Trump-owned property does business with foreign governments while Trump is in office. A federal judge dismissed one of those lawsuits late last year.

Various Trump-related consumer publications existed between 1997 and 2009, including Trump Style, Trump World, and the subsequent Trump Magazine, which reportedly shut down due to decreasing advertising revenue in the wake of the recession. These should not be confused with Trump magazine, a short-lived satirical mag of comics and short stories published briefly in 1957 by Playboy’s Hugh Hefner.

Correction: The original version of this story incorrectly described the Trump publication promoted by Eric Trump on Twitter. The Trump Organization told the Associated Press in a story published Feb. 12 that it is an internal promotional publication “not intended for general public distribution.” It is not a new magazine. 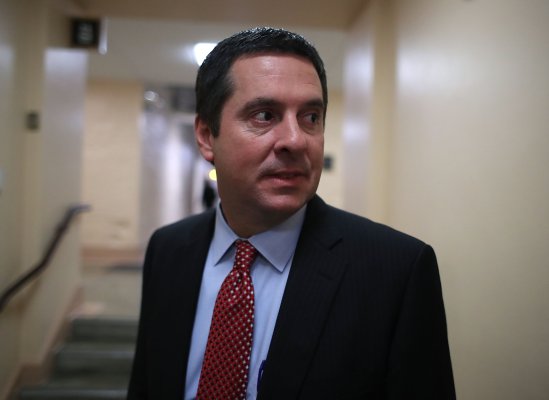 Why Republicans View the Nunes Memo as a Win
Next Up: Editor's Pick