Davis, a two-time Olympic champion, had originally intended not to attend the 2018 Winter Olympics opening ceremony due to his training schedule, a spokesman for U.S. speed skating told NBC. However, he had briefly reconsidered when he learned that he was tied with Erin Hamlin in the voting process for the role of Team U.S.A. flag bearer. But Hamlin was chosen as flag bearer in a tiebreaker.

In a tweet posted on Thursday, Davis accused Team USA of acting “dishonorably” after Hamlin bagged the role through a coin toss.

The two Olympic medal winners tied 4-4, according to the Associated Press, after votes were counted from the eight different sports federations that have a say in the matter of flag bearer.

Hansen had told NBC that he intended to skip the ceremony in order to rest.

“Opening Ceremony is one of my favorite days from the past two Olympic Games I’ve competed in, but at the same time, you know, I remember the next day, my legs were just a little stiff, my lower back was a little sore, so, you know, I think I might skip it this time around,” he said. 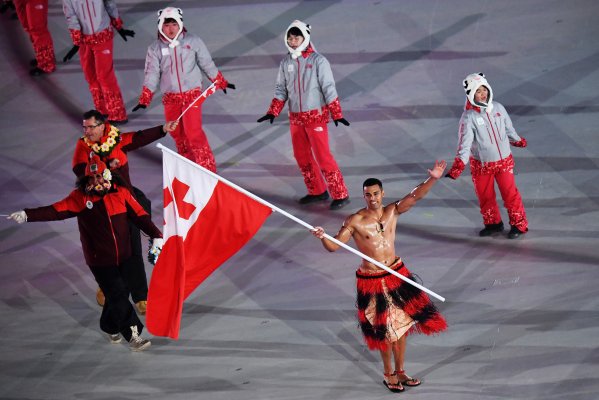 Freezing Cold Couldn't Stop the Tongan Flag Bearer From Going Shirtless Again at the Winter Olympics
Next Up: Editor's Pick