The Philadelphia Eagles are still basking in the glory of the franchise’s first Super Bowl title, but some players already have their minds made up on the White House visit that traditionally follows.

A day after defeating the New England Patriots, Eagles safety Malcolm Jenkins told CNN that he won’t be making the trip to Washington, D.C. to visit President Donald Trump.

“Nah, I personally do not anticipate attending,” Jenkins, who raised his fist during the National Anthem this past season, said Monday on New Day.

Jenkins is not alone in that decision. Defensive end Chris Long also plays to boycott the White House visit, just as he did last year when he won the Super Bowl with the Patriots.

“No, I’m not going to the White House. Are you kidding me?” he said during an interview on the Pardon My Take podcast last Sunday.

Eagles wide receiver Torrey Smith, who has been a vocal supporter of former San Francisco 49ers quarterback Colin Kaepernick and his decision to kneel during the National Anthem, will also not attend, according to NJ.com.

“They call it the anthem protest,” Smith added. “We’re not protesting the anthem. It’s a protest during the anthem. I understand why people are mad, or may be offended when someone takes a knee.”

On Sunday night, Trump tweeted after the game, writing, “Congratulations to the Philadelphia Eagles on a great Super Bowl victory!”

In September, the president repeatedly criticized the National Football League and its players who decided to kneel during the Star Spangled Banner.

“Wouldn’t you love to see one of these NFL owners, when somebody disrespects our flag, to say, ‘Get that son of a bitch off the field right now. Out. He’s fired. He’s fired!'” Trump said at the time.

The president’s comments sparked an outcry from a number of players across the league. More than 200 sat or kneeled during the anthem in the games that followed days after Trump made his remarks. The Eagles locked arms with teammates, police officers and military members while the Star Spangled Banner played ahead of their home opener against the New York Giants. 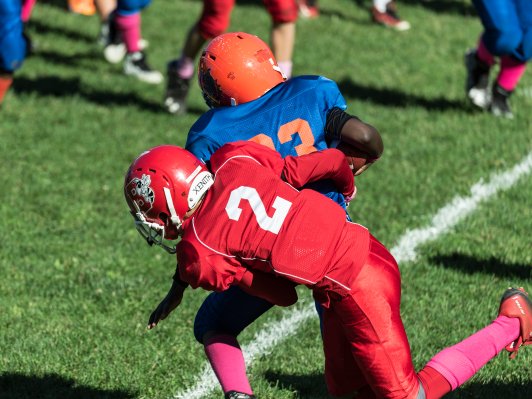 Repeated Hits to the Head — Not Concussions — May Cause CTE
Next Up: Editor's Pick