Tae Ok Ryom and Ju Sik Kim of North Korea compete in the Pairs Short Program during day one of the World Figure Skating Championships at Hartwall Arena on March 29, 2017 in Helsinki, Finland.
Joosep Martinson - ISU—ISU via Getty Images
By Alice Park/PyeongChang

To make it to the 2018 Winter Olympics in nearby PyeongChang, North Korea’s top figure skating pairs team first had to go far beyond the Korean peninsula. Under the guidance of veteran Canadian coach Bruno Marcotte, North Korean figure skaters Ryom Tae-ok and Kim Ju-sik spent months training in Montreal, honing their routine and preparing for a moment in the Olympic spotlight that almost didn’t come.

The unlikely relationship began at the Asian Games in 2017, where Marcotte was coaching a pair’s team from South Korea (he also coaches the top Canadian Olympic figure skating pair of Meagan Duhamel, who happens to be his wife, and Eric Radford). Something about the North Korean figure skaters caught his eye.

“I had seen them compete before and saw that they had improved a lot,” Marcotte says. Intrigued, he convinced his South Korean skaters to help introduce him.

“I wasn’t sure how to approach them,” says Alex Kang-Chan Kam, the skater Marcotte enlisted. “So I said hello, and they seemed to respond well and seemed open to talking to us. That was nice.”

Read More: 5 Big Stories to Watch at the Winter Olympics

That introduction began what was at first a tentative relationship, limited to smiles and other signs of silent acknowledgement from the North Korean pair, their coach and figure skating federation official during the rest of the competition. At the world championships a month later in Helsinki, Finland, Marcotte tried a few words of greeting in Korean, and eventually the pair—and their skating official—warmed up to him enough to ask for a meeting.

“They said they always admired Megan and Eric, and always admired my work and my sister’s work,” says Marcotte of his sister Julie’s choreography. “They wanted to come and skate and to use the same training ice as Eric and Megan, and to get a program done with my sister. They asked if it was possible for me to organize that. I was like, ‘Wow, yeah, let’s do it.’”

The logistics proved to be trickier. While the North Korean figure skating official spoke English, neither Ryom Tae Ok and Kim Ju Sik did, nor did they have driver’s licenses. That meant they had to live relatively close to the rink in Montreal where Marcotte coaches. One of his former students agreed to move in with his girlfriend for a few months last summer and rent his home to the North Koreans. Most days, Marcotte or Duhamel picked up and drove the team to the rink; on days when they couldn’t, they called Uber for them or enlisted the help of other skating students and teachers.

What intrigued Marcotte initially about Ryom and Kim was their expressiveness on the ice. “They skate with so much charisma on the ice, and your attention just goes to them,” he says. He admired their footwork sequences, and sensed that the pair had more talent than they were getting credit for. Under the new pairs skating judging system, he noticed that they were not getting the maximum number of points that they could for their skills, and it wasn’t because they weren’t capable of performing the elements—like lifts and spins—but that they hadn’t interpreted the rules fully.

In Montreal, Ryom became Duhamel’s shadow, mirroring her every move both on the ice and off, from her nutrition habits to her training regimen. The team’s coach remained at the boards with Marcotte, filming every session so they could study his suggestions on repeat. They made it clear their intentions were to win medals in pairs figure skating, even if it meant they would have to wait until the world championships in 2020 — which are being held in Montreal.

“I think that is realistic given where they are at right now,” Marcotte says of their odds.

Marcotte’s sister Julie found a piece of music for their long program from Quebecquoise singer Ginette Reno that reflected the North Korean’s new coaching influence. They will get a chance to showcase it at the Olympics in PyeongChang, which open this Friday, Feb. 9. The pair’s portion of the team skating competition begins that day and U.S. viewers can expect to see at least highlights on the NBC broadcast; they will compete again in the pairs event Feb. 14 and 15.

While the North Korean pair did not reveal much about their lives in Pyongyang, where each was raised, Ryom admitted to liking the arts while Kim enjoys guitar. Figure Skating is said to be popular with North Korean leadership. Several Canadian coaches and skaters, including Marcotte’s former students and one of Kam’s former coaches from Vancouver, have been invited to perform in ice shows in North Korea, once on Kim Jong Un’s birthday.

“Throughout my skating career I’ve met a couple of North Korean athletes at past competitions,” Kam, the South Korean skater, says. “I talked to them, and they seemed really friendly when we realized we were all the same people. We are all Korean people; they are not like the enemy or anything like that.”

While Ryom and Kim are the first figure skating pair from the Hermit Kingdom to compete in an Olympic games, they seem unlikely to be the last. 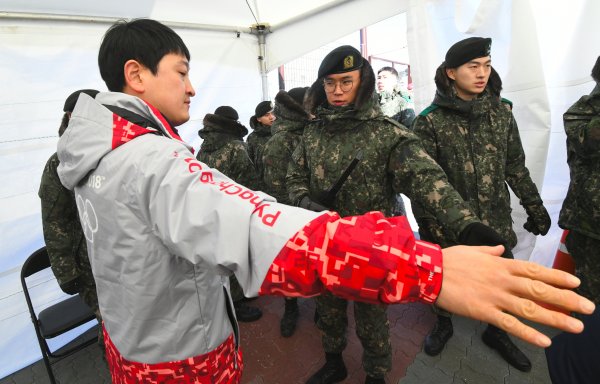 There's a Norovirus Outbreak at the Winter Olympics
Next Up: Editor's Pick