The father of Otto Warmbier, the American college student who died after being imprisoned in North Korea, will attend South Korea’s Winter Olympics as a guest of U.S. Vice President Mike Pence.

Fred Warmbier is scheduled to join Pence in PyeongChang, South Korea next week as the Vice President leads the U.S. 2018 Winter Olympic delegation at the opening ceremony for the games, the Washington Post reports. The primary purpose of Pence’s five-day trip to Japan and South Korea is to maintain pressure on the North Korean regime, according to White House officials cited by the Post.

Pyongyang detained Otto Warmbier in Jan. 2016 after he allegedly stole a propaganda poster during a tourist trip in the hermetic nation; after a secretive trial and what may have been a forced confession, the then 21-year-old was sentenced to 15 years hard labor. Warmbier was released from custody in June 2017 — 17 months into his sentence — but died in a Cincinnati hospital six days after his return to the U.S.

According to North Korean medical records he had been in a persistent vegetive state since April 2016. It remains unclear how and why he fell unconscious.

Read more: Otto Warmbier’s Death May Spell the End of American Tourism to North Korea. Sadly, That’s About It

During last week’s State of the Union address, U.S. President Donald Trump delivered a tribute to Otto’s mother as she, his father and two siblings sat in the audience. “You are powerful witnesses to a menace that threatens our world, and your strength inspires truly us all,” Trump said. “Tonight, we pledge to honor Otto’s memory with total American resolve.”

The Warmbiers have praised Trump for bringing their son home. Employing a term used to describe the Obama administration’s approach to North Korea, Fred Warmbier previously told the Post that the era of “strategic patience” was over for his family. 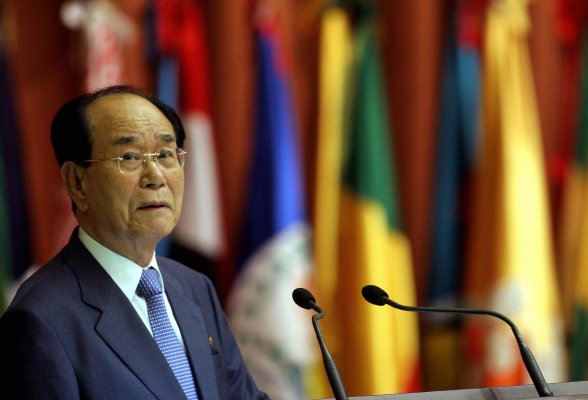 North Korea to Send High-Level Delegation to Olympics
Next Up: Editor's Pick