Get Your First Glimpse of Solo: A Star Wars Story in This Teaser That Aired During the Super Bowl

A teaser for Disney and Lucasfilm’s Solo: A Star Wars Story landed in the midst of the Super Bowl Sunday, setting Twitter alight ahead of the release of the full-length trailer. The film is set to premiere on May 25.

The latest installment of the decades-spanning space saga stars Alden Ehrenreich as a young Han Solo, the co-pilot of the Millennium Falcon spacecraft played by Harrison Ford in Star Wars episodes past.

The action centers on the adventures of a young Solo and his furry co-pilot Chewbacca before they joined the Rebellion. That includes dealings with the smooth-talking smuggler Lando Calrissian, played by actor and Grammy Award-winning musician Donald Glover. Thandie Newton, Emilia Clarke and Woody Harrelson also appear in the film.

Read more: Here’s a Complete List of All the Upcoming Star Wars Movies

Reviews were something of a mixed bag, but there’s certainly a lot of buzz about the forthcoming full trailer. Here’s what a few Twitter users had to say:

A full-length trailer will be shown on Good Morning America Monday. Check out the teaser above. 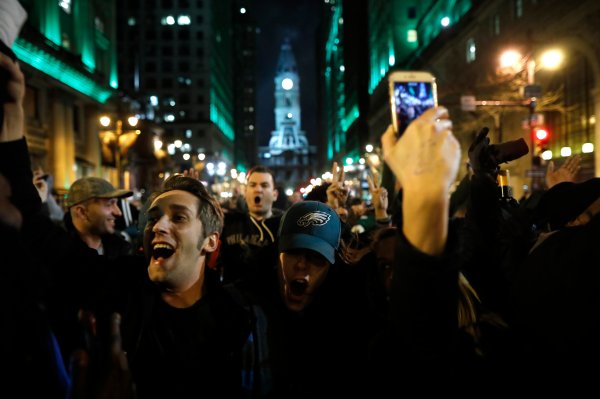 Eagles Fans Are Already Going Nuts in Philadelphia
Next Up: Editor's Pick