It’s been over 20 years since former President Bill Clinton’s affair with 22-year-old White House intern Monica Lewinsky came to light. In those two decades, Lewinsky has gone from a political punchline to anti-bullying advocate. Now, she’ll be helping to retell her story as a producer on Ryan Murphy’s forthcoming TV series on Clinton’s impeachment.

The affair between Clinton and Lewinsky was first reported by media outlets in January of 1998, but Clinton didn’t admit having an “inappropriate relationship” with Lewinsky until that August, when he apologized for what he called “a critical lapse in judgment and a personal failure on my part for which I am solely and completely responsible.”

Though Clinton was a popular president even at the height of the scandal, during which he was impeached but not removed from office, and his reputation has largely recovered.

But Lewinsky, now 46, has said she was bullied and slut-shamed by the media for years after the affair was made public. She was portrayed as a ditz on Saturday Night Live, while late-night hosts made sexual jokes at her expense. The New York Times’ columnist Maureen Dowd called her “a ditsy, predatory White House intern who might have lied under oath for a job at Revlon.” The Wall Street Journal labeled her a “little tart,” while the New York Post opted for “portly pepperpot.” Fox News ran a poll asking whether Lewinsky was an “average girl” or “young tramp looking for thrills,” with 54% rating her as a tramp.

Public opinion about Lewinsky is changing too. The 20th anniversary of Clinton’s impeachment in 2018 fell amid a nationwide conversation about sexual harassment in the workplace. In an essay for the March 2018 issue of Vanity Fair, Lewinsky said that the #MeToo movement prompted her to begin to grapple with the power dynamics at play in her relationship with Clinton. In a June 4, 2018, interview, NBC’s Craig Melvin asked Clinton whether he owed Lewinsky an apology in the wake of the #MeToo movement. Clinton said he did not, adding that he apologized publicly but never reached out to her personally.

“No. I have never talked to her. But I did say publicly on more than one occasion that I was sorry. That’s very different,” Clinton said. “The apology was public.”

Here’s how Lewinsky responded to the backlash and emerged from the scandal over the past two decades, and what she’s doing now.

Lewinsky said she had been “unfairly” portrayed

In a March 1999 interview, Barbara Walters noted that Lewinsky had been described as a “bimbo, a stalker, a seductress.” When asked to describe herself, Lewinsky said she was “very loving, I’m very loyal, I think I’m intelligent … I think I certainly feel that I have been misportrayed in the past year, and unfairly so.”

Later that year, author Andrew Morton published Monica’s Story, a biography of the former White House intern based on interviews with Lewinsky. “It’s the story of how an emotionally needy young woman sought to assuage her low self-esteem with eating binges and affairs with unavailable men,” the New York Times’ Michiko Kakutani wrote in a review of the book.

As the scandal faded from the headlines, Lewinsky kept her head down. According to a 2001 interview with New York Magazine, Lewinsky moved to New York City and started running a handbag company. She said that it was difficult for her to find a job, telling the magazine: “People aren’t jumping to hire me.”

She moved to London in 2005 and began working on her Master’s degree in social psychology at the London School of Economics. Her former publicist told TIME in 2009 that she was trying to avoid publicity.

Lewinsky re-emerged with a powerful essay

In 2014, Lewinsky wrote an essay for Vanity Fair, detailing her life after the affair and the public humiliation she endured. She said that she tried to look for jobs after graduating from the London School of Economics, but she was always turned away because of her past.

“Me, America’s B.J. Queen. That Intern. That Vixen. Or, in the inescapable phrase of our 42nd president, ‘That Woman,’ Lewinsky wrote. “It may surprise you to learn that I’m actually a person.”

But she said that she found a purpose when she heard about the death of Tyler Clementi, who jumped off a bridge in September 2010 after his college roommate allegedly released a video of him having sex with another man. She said that Clementi’s death gave her own suffering a new meaning, as she realized that her example might help others get through the experience of being humiliated.

“I would never be so presumptuous as to equate my own story with Tyler Clementi’s. After all, my public humiliation had been the result of my involvement with a world-renowned public figure—that is, a consequence of my own poor choices,” she wrote. “I wished I had been able to say to him that I knew a little of how it might have felt for him to be exposed before the world. And, as hard as it is to imagine surviving it, it is possible.”

Lewinsky, who has called herself the “first [non-public personality] to have my identity and reputation savaged by the virality of the Web” has become an outspoken anti-cyberbullying advocate. In March 2015, she gave a powerful TED Talk about cyberbullying, receiving a standing ovation.

In June 2015, she announced she would become a strategic advisor for anti-bullying organization Bystander Revolution. She’s since launched an anti-cyberbullying emoji initiative and unveiled an anti-bullying PSA.

In her 2014 Vanity Fair essay, Lewinsky, who has always said that her relationship with Clinton was consensual, noted that she didn’t receive much support from feminists at the height of the scandal.

“Given the issues at play—gender politics, sex in the workplace — you’d think they would have spoken up,” Lewinsky wrote. “It also didn’t help that my case was not one of conventional ‘sexual harassment.'”

As Barbara Ehrenreich noted in a 1998 TIME op-ed, few prominent feminists spoke up in defense of Lewinsky, perhaps because of their support of President Clinton’s politics. The Feminine Mystique author Betty Friedan called her “some little twerp.”

In the years since, however, some who kept silent have expressed regret. For example, during a 1998 panel discussion, several prominent women criticized and poked fun at Lewinsky — including Fear of Flying author Erica Jong, who in 2015 apologized for making critical comments about Lewinsky. And it hasn’t just been women: Comic Bill Maher said in 2014 that he “literally felt guilty” about his jokes about Lewinsky, and David Letterman said in 2014 he felt bad about making “relentless jokes about the poor woman.”

Some have viewed the case as particularly relevant amid the #MeToo movement. For example, in November 2017, Pulitzer Prize winner Kathleen Parker wrote in a column for the Washington Post that Clinton — not Lewinsky — was at fault for the affair.

“It doesn’t matter if Lewinsky, then 21, pursued the president and ‘knew’ what she was doing,” Parker wrote. “Obviously, given the long-term effects of this episode on her life, she didn’t.”

A spokesperson for Lewinsky told TIME in 2018 that she wasn’t available for interview. In October 2017, Lewinsky tweeted #MeToo — the hashtag millions of people used to indicate that they had experienced sexual harassment and assault. It was unclear what specifically Lewinsky was referring to in her tweet.

In an essay for Vanity Fair’s March 2018 issue, Lewinsky said the #MeToo movement made her begin to grapple with the power dynamics at play in her relationship with Clinton.

“Now, at 44, I’m beginning (just beginning) to consider the implications of the power differentials that were so vast between a president and a White House intern. I’m beginning to entertain the notion that in such a circumstance the idea of consent might well be rendered moot,” she wrote. “But it’s also complicated. Very, very complicated.”

“But I know one thing for certain: part of what has allowed me to shift is knowing I’m not alone anymore,” she added. “And for that I am grateful.”

In recent years, Lewinsky has participated in pop culture’s re-examination of the relationship. She sat for interviews for the A&E docuseries The Clinton Affair, which aired in November 2018. On Aug. 6, Lewinsky announced that she signed on to produce the upcoming season of Murphy‘s acclaimed American Crime Story, which will be centered on the Clinton impeachment. Murphy had previously said he would only do the show with Lewinsky’s participation. Beanie Feldstein will play Lewinsky in the series.

“People have been co-opting and telling my part in this story for decades,” Lewinsky told Vanity Fair on Aug. 6. “In fact, it wasn’t until the past few years that I’ve been fully able to reclaim my narrative.” 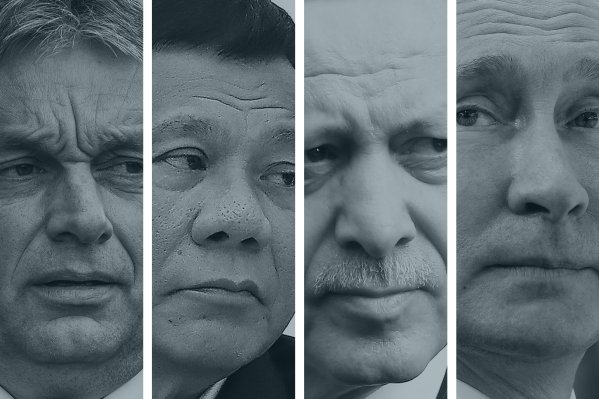 The 'Strongmen Era' Is Here. Here’s What It Means for You
Next Up: Editor's Pick