5 Big Stories to Watch at the Winter Olympics

By Sean Gregory and Ben Goldberger

Think you’re ready for the 2018 Winter Olympics in PyeongChang? The Winter Games are set to begin this Friday, Feb. 9, with the opening ceremony—and there’s a lot more to it than skiing stars, crazy curling pants and a tenuous diplomatic truce between North and South Korea. From soft-pedaled doping bans to high-flying new events to the frigid temperatures in South Korea’s Olympic stadium, here’s your cheat sheet to the biggest stories around the 2018 Winter Olympics.

Officially, Russia was barred from sending a team to PyeongChang as penance for its elaborate state-supported doping scheme at the Sochi Olympics. But 28 Russian athletes had their doping bans overturned and 169 athletes who were deemed clean by the International Olympic Committee (IOC) will each compete as an “Olympic Athlete from Russia.” They won’t march under their nation’s flag or hear its anthem if they medal—but they’ll ensure that Russia’s presence is felt.

Some new Olympics events will make their debut in PyeongChang: the Alpine team competition, in which 16 countries square off in a mixed-gender slalom tournament; big-air snowboarding (boarders ascend to the top of a tower, then fly off a 160-ft. ramp); mixed doubles curling, which features two curlers—a man and a woman—on a squad rather than the usual four; and mass-start speedskating (think a very crowded oval).

Read more: What to Know About Every Winter Olympic Sport

Age is just a number

No sporting event mixes young and old quite like the Olympics. German speedskater Claudia Pechstein, 45, will become the first woman to compete in seven Winter Olympics Games; in the 5,000m, she’s seeking to become the oldest Winter Olympic medalist in an individual event. Team USA’s oldest member, hockey player Brian Gionta, 39, spurned offers from the NHL so he could return to the Winter Games a dozen years after his previous Olympic appearance. (For the first time since 1994, NHL players will not compete in the Olympics.) Americans Kelly Clark (snowboarding), Kikkan Randall (cross-country skiing) and Shani Davis (speedskating) are all appearing in their fifth Olympics. The youngest U.S. Olympian is figure skater Vincent Zhou, 17.

Ecuador, Eritrea, Kosovo, Malaysia, Nigeria and Singapore are all participating in their first Winter Games in PyeongChang. Computer-science student Shannon-Ogbani Abeda, 21, will represent Eritrea; his parents fled the East African nation in the 1980s during the War of Independence and settled as refugees in Alberta, where Abeda grew up skiing.

If you’re watching the Winter Olympics from the comfort of your own home, be thankful. While temperatures in Vancouver and Sochi could be downright balmy, these Games could be the coldest since 1994, when Lillehammer, Norway, was host. One recent temperature reading from the PyeongChang Olympic Stadium: –8°F. For the opening ceremony, Polo Ralph Lauren will outfit Team USA in heated parkas powered by a battery pack. 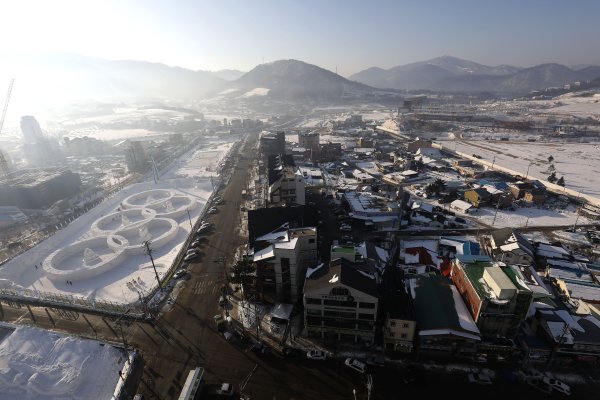 The Dates and Locations You Need to Know for the 2018 Winter Olympics
Next Up: Editor's Pick