President Trump Said His State of the Union Was the Most Watched in History. It Wasn't

President Donald Trump touted the ratings from his State of the Union Thursday morning, tweeting that the numbers were record-breaking. But they actually weren’t.

“Thank you for all of the nice compliments and reviews on the State of the Union speech. 45.6 million people watched, the highest number in history. [Fox News] beat every other Network, for the first time ever, with 11.7 million people tuning in. Delivered from the heart!” Trump tweeted Thursday morning, his third tweet of the day.

Trump’s three immediate predecessors — former Presidents Barack Obama, George W. Bush, and Bill Clinton — all amassed higher ratings from their first State of the Union than he did: 48 million people tuned in to watch Obama in 2010; 51.7 million tuned in to Bush in 2002; and 45.8 million tuned in for Clinton in 1994. (The President delivers an address to the joint sessions of Congress during his or her first year, and the State of the Union the following year).

Trump’s speech, however, did have the highest views since Obama’s in 2010.

This is not the first time the President or his administration has inflated statistics in this regard. After Trump’s inauguration, he said 1.5 million people attended — which was dubious based on photographs — and his then-Press Secretary Sean Spicer told reporters, “that was the largest audience to witness an inauguration, period.” Spicer later said he regretted making that claim. 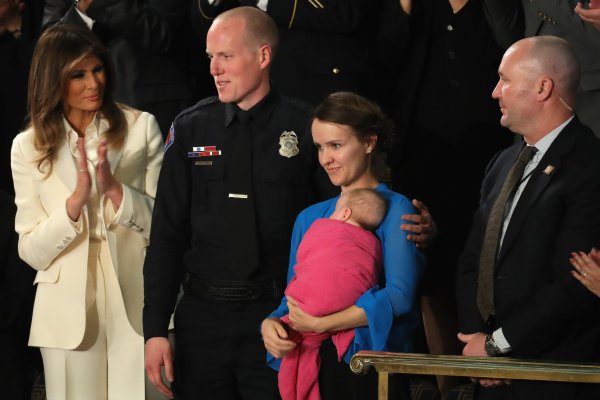 The Sad and Inspiring Story Behind the Police Officer at the State of the Union Who Adopted a Heroin Addict's Baby
Next Up: Editor's Pick