Shaun White Is Chasing Gold at the 2018 Winter Olympics. Here Are 5 Facts You May Not Know About the Snowboarder

Best known as “the Flying Tomato,” the break-out star of the Winter Olympics of years past has set snowboarding records and, most recently, scored the perfect 100 in his qualifying event for the upcoming 2018 Winter Olympic Games in PyeongChang, South Korea. White also has a number of ventures outside of the Olympics, including a skateboarding career and a stint as the guitarist for a rock band.

But with great success sometimes comes hardship. White had a disappointing finish in the Sochi Winter Olympics in 2014, where he placed fourth and missed the podium in his signature half-pipe event. And his run-up to the Olympics this year was threatened by two major injuries that both landed him in the hospital in the fall.

Nonetheless, White will return to this year’s Winter Olympics with an eye on the podium, as recently teased during a Super Bowl LII commercial set to to Black Sabbath’s “Iron Man.” Here are fun facts to know about White before he hits the half-pipe with qualifications on Feb. 12:

Just months out from the 2018 Winter Olympics, White fell during practice in New Zealand and split open his face. The bloody crash in October 2017 resulted in 62 stitches — and a missed month of training.

“I just like scared myself,” White said after the injuries, according to the NBC Olympics site. “I’ve never really had that much blood coming out of me before.”

The gruesome crash did not appear to affect White’s snowboarding, however. At the U.S. Grand Prix in January, where athletes vying for Olympic spots compete, White not only qualified for his fourth Olympic team, but he also scored a perfect 100 — the second perfect score of his career.

As expected with extreme sports, White has suffered a number of other injuries throughout his career — including another serious one this season. Last September, White was sent to the hospital after he fell while attempting a double flip. That injury kept him out of the Winter Games NZ, where his Olympic teammates Chloe Kim and Kelly Clark competed.

In a post on Instagram, White wrote: “The biggest scare was seeing blood in my urine but after the tests came back looking good I was released to go home.”

Shaun White has two Olympic medals—and is chasing a third

Following a disappointing fourth-place finish in Sochi, White aims to return to the podium in his fourth Olympic Games in PyeongChang. In fact, gold is a familiar color for White. He’s won two Olympic gold medals and has the most gold medals of any X Games competitor.

It’s unclear how White will fare against stiff competition in PyeongChang—particularly from the Australia’s Scott James and Japan’s Ayumu Hirano — but his perfect score on the halfpipe in January could be an indicator of his snowboarding talent at the moment.

“Getting the perfect score was just nuts,” White said after the event in January. “I mean, I’m just so happy. Honestly, I never say this, I’m really proud of myself.”

“It’s been a long recovery from that to get to this point to try to make the team, and just to get rewarded for that run,” White added. “I really felt like I put it down.”

In addition to his Olympic gold medals, White’s accomplishments include 18 X Games medals in snowboarding, 10 ESPY awards and 10 U.S. Open medals. (Additionally, he was the youngest rider to ever win a U.S. Open.)

Going pro at age 13, White also scored endorsement deals with brands like Oakley and Target, where he had launched a boys clothing line several years ago.

White now has a number of his own entrepreneurial ventures. He has a men’s clothing line called WHT Space, and he owns a percentage of Mammoth Mountain, a popular Southern California ski resort where snowboarding athletes often train. White consistently tops lists of the highest-paid Olympic athletes and Forbes valued him at $20 million in 2012.

In addition to snowboarding, White is also a decorated skateboarder, with five X Games medals, including a gold in 2011.

White rode professionally for Tony Hawk’s Birdhouse Skateboards, and has floated the idea of competing at the 2020 Summer Olympics in Tokyo, where skateboarding will debut as an Olympic sport.

The actual skateboarding events at the Olympics aren’t within White’s specialties, as the park and street competitions don’t include a half-pipe. “It’s going to take a little learning curve but it won’t be too dramatic,” White told the Associated Press of training for those events.

Shaun White is also a musician

Outside of sports, White also plays the guitar. He played guitar for and went on tour with the group Bad Things for several years until they disbanded in 2015. White learned to play guitar after he won a snowboarding event and received a Fender Stratocaster, according to Rolling Stone.

White’s band released one self-titled album in 2014, and performed at 2013’s Lollapalooza.

The band also performed at Air + Style, which is a snowboarding, skateboarding and music festival held in Los Angeles. As it combines many of White’s interests, the athlete became a majority shareholder in the event in 2014. The festival has drawn talent like Kendrick Lamar, Flume and J Cole, and the upcoming event in March will include performances from Phoenix, Zedd and Gucci Mane. 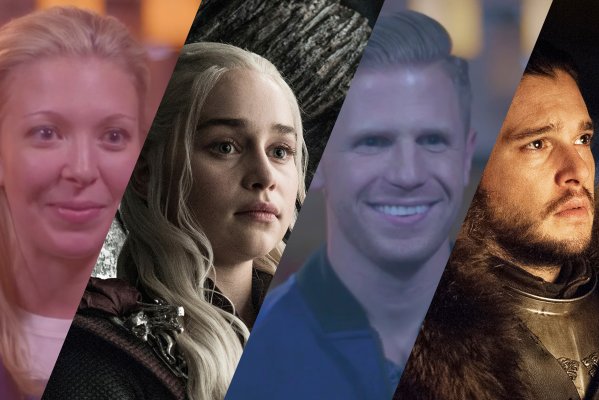 Here's Who Olympians Think Should Sit Atop the Iron Throne
Next Up: Editor's Pick