President Trump's Big Speech Was Harsher Than It Sounded

In terms of presidential communications, the State of the Union address is the opposite of a tweet.

It’s long — more than 5,000 words instead of just 280 characters. It’s lofty — full of calls for unity instead of personal attacks. And it’s thoughtful — drafted by a team of advisers over the course of weeks instead of fired off from a smart phone.

But as President Trump gave his first State of the Union address to a sharply divided country Tuesday, the different format obscured deeper similarities. Beneath the more measured tone and carefully considered words, Trump still flicked at the controversies that have defined his presidency and the divisions he’s sown with his tweets.

Consider the most-tweeted moment of the evening, according to Twitter’s own data. The president had just recognized a 12-year-old boy from California sitting next to First Lady Melania Trump who started a movement to put flags on the graves of veterans.

“Preston’s reverence for those who have served our nation reminds us why we salute our flag, why we put our hands on our hearts for the Pledge of Allegiance, and why we proudly stand for the national anthem,” Trump said.

For any other president, it would have been an anodyne statement, barely worth remarking upon. But it came just four months after Trump stood before a roaring crowd in Alabama and called a professional athlete who kneels during the national anthem in protest of police brutality a “son of a bitch.”

The context was not lost on Democrats in attendance, most of whom sat silently during the moment.

The speech Tuesday night marked the second major time since inauguration that America saw Trump play the role of a more traditional president, sticking to the teleprompter for about an hour and a half before both chambers of Congress as he outlined policy ideas and singled out individual Americans for praise.

But even as he reached out to Democrats, the sentiments he expressed remained distinctly Trumpian, especially on issues such as immigration.

The speech came as Congress heatedly debates the fate of the so-called Dreamers, undocumented immigrants who were brought to the U.S. as children. Since the Trump Administration canceled the Obama-era Deferred Action for Childhood Arrivals program last fall, about 800,000 Dreamers have been put at risk of deportation.

But as Trump outlined his proposal to offer the Dreamers a “generous” path to citizenship in exchange for cuts to legal immigration and tougher border security measures, he stressed the purported risks of crime from immigrants.

“Tonight, I am extending an open hand to work with members of both parties — Democrats and Republicans — to protect our citizens of every background, color, religion, and creed,” he said. “My duty, and the sacred duty of every elected official in this chamber, is to defend Americans — to protect their safety, their families, their communities, and their right to the American Dream.”

“Because Americans are dreamers too,” he added, pointedly.

It was a line that in another president’s speech might have been unifying, but Trump’s framing was more ambiguous. Was he borrowing the term for undocumented Americans brought as children for Americans who might face violence from immigrants? Not necessarily, but then again, the very next section of the speech delved into the story of an immigration agent who fought the brutal MS-13 gang.

Even the First Lady’s box, traditionally a place reserved for noteworthy Americans to be highlighted, became another reminder of the president’s dark thoughts. In an echo of the “angel moms” who Trump frequently highlighted during the 2016 campaign, Trump invited two couples whose teenage daughters were each murdered in 2016 by MS-13 gang members.

“Many of these gang members took advantage of glaring loopholes in our laws to enter the country as illegal unaccompanied alien minors,” Trump said. This was a vintage campaign move of Trump’s, and one that may rankle the Democrats he needs to work with on immigration reform by, in their view, fear-mongering about undocumented immigrants. (Trump ad-libbed “illegal” in his remarks.)

Trump proceeded amid the usual spectacle of a State of the Union, with lawmakers applauding and standing or emphatically staying quiet and sitting, to express their opinion on each aspect of the speech. But what wasn’t typical was the 14 Democrats who refused to attend, the most lawmakers in history to protest the event, according to CNN. And numerous Democratic women wore black to the event in solidarity with the #MeToo movement.

With this evidence of political and cultural divides creeping into the House chamber, Trump’s calls for unity often rang hollow. Much of his speech focused on promoting accomplishments of his first year, including tax cuts and regulatory reform. And for year two, he set goals for infrastructure, tackling opioid addiction, fighting ISIS and resolving the immigration debate. But infrastructure and immigration were also goals he set out in his first joint address to Congress last year, and if anything the political potential for compromise has lessened since then.

Looking to the future, Trump promised “all of us, together, as one team, one people, and one American family.”

“We all share the same home, the same heart, the same destiny, and the same great American flag,” he said.

Despite delivering a lengthy, tonally disciplined speech Tuesday evening, Trump himself remains a wild card in any efforts to bring people together, politically or socially.

Democratic Rep. Jan Schakowsky, who did not attend the speech, said on CNN before the event that she wouldn’t put much stock in any scripted paeans to American unity. “Who knows what he’s going to tweet at midnight when he gets home,” she said.

After all, during his first joint address to Congress last year, Trump struck a similarly optimistic tone, saying “the time for trivial fights is behind us.” Four days later, he tweeted without evidence an accusation that Barack Obama wiretapped Trump Tower. 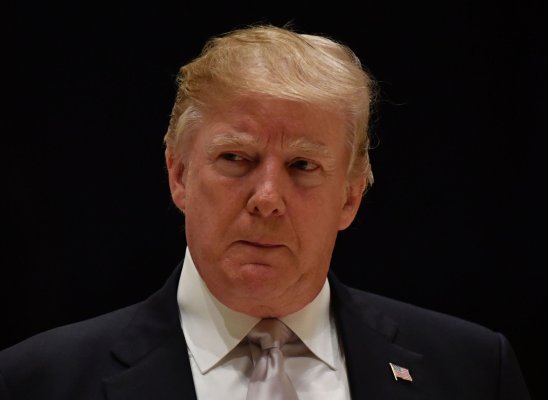