What to Know About the Opening Ceremony for the 2018 Winter Olympics: When, Where and How to Watch

The 2018 Winter Olympics in PyeongChang, South Korea officially kicked off on Friday, Feb. 9 with a highly-anticipated opening ceremony.

The Olympics opening ceremony, which had a theme of peace, featured K-pop (several countries marched out to BTS, and Team USA marched out to “Gangnam Style“), heated patriotic uniforms and some very cold temperatures.

Days before the event, organizers were working to stop a norovirus outbreak from spreading, ensure spectators and performers were equipped to endure freezing temperatures, and avoid exacerbating tensions among world leaders in attendance, including U.S. Vice President Mike Pence and the sister of North Korean leader Kim Jong Un.

Here are the key details to know about the Olympics opening ceremony:

What time did the 2018 Olympics opening ceremony start?

How can I watch the Olympics opening ceremony?

Early-bird Olympic enthusiasts in the United States were able to watch the opening ceremony live beginning at 6 a.m. EST on NBCOlympics.com and the NBC Sports app, which is available on streaming devices, including Roku, Amazon Fire and Apple TV. Later on Friday at 8 p.m. EST, NBC will air a “fully-produced” television broadcast of the opening ceremony, featuring interviews and commentary by hosts Katie Couric and Mike Tirico.

Where was the opening ceremony held?

The Olympics opening ceremony took place in the new PyeongChang Olympic Stadium, which seats 35,000 people. The venue will be used just four times — for the opening and closing ceremonies of the 2018 Olympics and Paralympics — before being torn down. Construction of the stadium was part of the roughly $13 billion that South Korea is spending on the Olympics, the Associated Press reported.

But amid severe winter weather warnings, organizers feared that the Olympic stadium, which has no roof, might make the opening ceremony too cold for spectators to endure. Temperatures in PyeongChang this month have been falling to -4 degrees Fahrenheit at night, Reuters reported.

The forecast prompted organizers to work on measures to prevent cases of hypothermia and prepare for no-shows. Spectators were given hot packs, seat warmers, blankets, hats and windbreakers to keep warm. But temperatures at the opening ceremony were warmer than expected at 28 degrees Fahrenheit, and some athletes appeared unfazed.

What happened at the Olympics opening ceremony?

As in every Olympics opening ceremony since 1908, athletes marched into the stadium under their country’s flag during the Parade of Nations. Olympic athletes from North and South Korea marched together under a single flag — a historic diplomatic decision that caused some controversy.

Even before North and South Korea agreed to unite, organizers had planned for the Olympics opening ceremony to have a theme of peace. Korean musicians performed John Lennon’s “Imagine,” surrounded by lights in the shape of a dove.

“We have worked on all of our scenarios under the theme of peace,” Song Seung-whan, the executive creative director for the opening ceremony, said at a press conference in January, according to Reuters. “Although North Korea’s participation was decided belatedly, we think this will serve as a good opportunity for us to convey our message more clearly.”

More than a thousand drones lit up the sky in the shape of the Olympics rings, above a show that featured 1,300 performers and 700 volunteers at one point, the New York Times reported. South Korean figure skater Yuna Kim lit the Olympic cauldron after performing a short skating routine.

Pita Taufatofua — the oiled-up Tongan flag-bearer who became a social media sensation during the opening ceremony of the 2016 Rio Olympics — is competing in PyeongChang as a cross-country skier. He carried his country’s flag at Friday’s opening ceremony, stealing the show once again with the same shirtless uniform despite freezing temperatures.

Team USA weathered those bitter temperatures by wearing heated parkas as they paraded into the Olympic stadium. The uniforms, which feature American flags made of heat-conductive ink, were designed by Polo Ralph Lauren, the official outfitter for the 2018 U.S. Olympic and Paralympic teams.

Who attended the opening ceremony?

Earlier in the day, Pence met with North Korean defectors and Fred Warmbier — the father of Otto Warmbier, an American college student who died last year after being imprisoned in North Korea. Fred Warmbier had also been scheduled to attend the opening ceremony as Pence’s guest, the Washington Post reported. The Warmbiers attended this year’s State of the Union address by President Trump, who pointed to them as “powerful witnesses to a menace that threatens our world.”

Kim Jong Un sent his younger sister, Kim Yo Jong, to the opening ceremony as part of the North Korean delegation, which is led by Kim Yong Nam, president of North Korea’s parliament. The unprecedented visit marked the first time an immediate member of the Kim family has been to South Korea. It’s not clear if any of the North Korean representatives will meet Pence or other U.S. officials at the Olympics, though they were seated near each other at the opening ceremony. “We’ll have to see what happens,” U.S. Secretary of State Rex Tillerson said when asked about it on Monday, according to Reuters.

Meanwhile, President Trump and Kim Jong Un were represented at the opening ceremony by two impersonators in the stands, who caused a stir and were asked to leave. 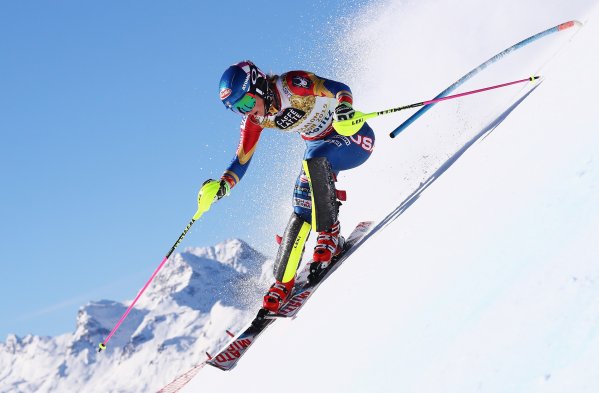 How Mikaela Shiffrin Became the Best Skier in the World
Next Up: Editor's Pick