Donald Trump Expressed Confidence in John Kelly. Kelly Might Want to Brush Up His Resume

President Donald Trump tweeted this week that he has confidence in White House Chief of Staff John Kelly. But if Trump’s past comments are any guide, that might mean it’s time for Kelly to start looking for a new job.

During his first year in office, Trump has used expressions of confidence to push back against negative news stories, assert his control over White House staff and, ironically, signal that he actually does not have confidence in someone.

Because of these conflicting reasons, it’s hard to draw an exact cause-and-effect. But it’s safe to say that if Trump is publicly expressing confidence in your position, you might want to freshen up your LinkedIn profile.

In Kelly’s case, the tweet appears to have been a response to a Vanity Fair article which alleged that Trump was upset with Kelly’s recent remarks — telling Fox News the President had “evolved” on the border wall (which Trump quickly disputed) and telling Democratic lawmakers that the President was “uninformed” on how a wall would work.

The money quote in the piece — attributed, as these kinds of things often are, to a source briefed on a call Trump had with a friend, so reader beware: “I’ve got another nut job here who thinks he’s running things.”

Whether the story is accurate or not, it’s true that Kelly is increasingly in the hot seat. Republican Sen. Lindsey Graham of South Carolina blamed Kelly (and White House aide Stephen Miller) for hindering negotiations on the government shutdown after the chief of staff personally intervened to scotch a handshake deal between Trump and Senate Democratic Leader Chuck Schumer.

But the telltale sign may be Trump expressing his confidence. (Or worse, refusing to say whether he has confidence.) Here’s a quick review.

Asked in an April interview if he still has confidence in chief strategist Steve Bannon, Trump does not give a definitive answer. Asked again on Aug. 15, Trump is again unclear. “We’ll see what happens with Mr. Bannon,” he says. Three days later, Bannon is fired.

White House spokeswoman Sarah Huckabee Sanders won’t say on July 27 if Trump has confidence in Chief of Staff Reince Priebus, who is fired the next day.

Asked if he would fire Health and Human Services Secretary Tom Price over controversial use of a private jet, Trump says on Sept. 27 that he’s “not happy” but has “no immediate plans” to remove him. The next day, Price says “I think we’ve still got the confidence of the President.” The day after that, Price resigns under pressure.

Amid reports that Trump is unhappy with Attorney General Jeff Sessions, Sanders says on June 8 that the president “absolutely” has confidence in him. It’s later reported by Politico and the New York Times that Sessions submitted a resignation letter in May that Trump ultimately turned down. 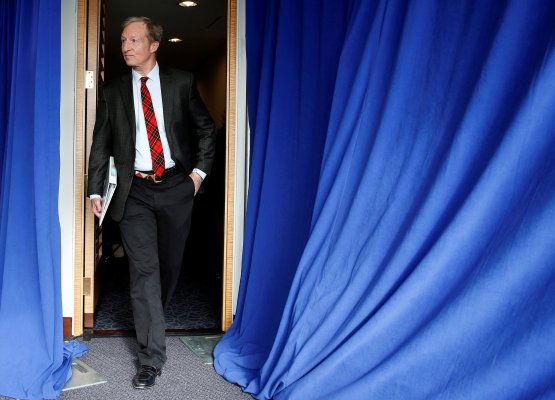 Meet Tom Steyer, The Man Running a Campaign to Impeach Donald Trump
Next Up: Editor's Pick