“We really are an army of survivors,” Raisman said during a Today show appearance Thursday, referring to the more than 150 women who provided in-person statements in a Michigan courtroom about how the Nassar’s abuse affected them. She vowed to hold those who supported Nassar’s decades-long abuse responsible, saying, “this is just the beginning for us.”

Nassar had been a volunteer team doctor for USA Gymnastics and a faculty member at Michigan State University, abusing gymnasts and other athletes while in these positions. The women appeared at his sentencing hearing for seven counts of criminal sexual conduct. After six days of their testimony, Judge Rosemarie Aquilina sentenced Nassar to 40 years to 175 years in prison Wednesday, noting: “You do not deserve to walk outside a prison ever again.”

Raisman made a surprise appearance on the fourth day of emotionally charged testimony by the survivors, confronting Nassar and sharply criticizing USA Gymnastics, the U.S. Olympic Committee, and Michigan State University for failing to protect athletes from Nassar’s abuse. She called USA Gymnastics an organization that was “rotting from the inside.”

An osteopathic doctor, Nassar abused the young girls, some as young as 6 years old, while convincing them the assaults were medical treatments.

Since Raisman revealed she was abused by Nassar in November, she has turned her public appearances and social media accounts into a platform for change at USA Gymnastics and continued to question the organization’s insufficient actions in addressing Nassar’s victims.

Raisman said she had not planned on attending the sentencing hearing, but was inspired to do so after watching the testimony of the other survivors. On the same day that she appeared, her 2012 Olympic teammate and fellow Fierce Five member Jordyn Wieber also appeared in the court to reveal that she too was sexually abused by Nassar. Two other members of the 2012 Olympic team, Gabby Douglas and McKayla Maroney, have also revealed through their social media accounts that they were victims of Nassar’s abuse.

USA Gymnastics has said it supports an independent investigation into how the abuse could have occurred. 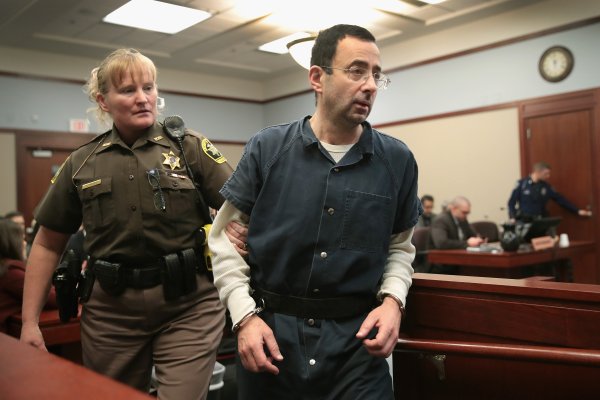 'These Girls Grew Up to Be Strong Women Who Destroyed His World.' Gymnasts React to Larry Nassar Sentencing
Next Up: Editor's Pick