In the biggest blow he’s dealt to the renewable energy industry yet, President Donald Trump decided on Monday to slap tariffs on imported solar panels.

The U.S. will impose duties of as much as 30 percent on solar equipment made abroad, a move that threatens to handicap a $28 billion industry that relies on parts made abroad for 80 percent of its supply. Just the mere threat of tariffs has shaken solar developers in recent months, with some hoarding panels and others stalling projects in anticipation of higher costs. The Solar Energy Industries Association has projected tens of thousands of job losses in a sector that employed 260,000.

The tariffs are just the latest action Trump has taken that undermine the economics of renewable energy. The administration has already decided to pull the U.S. out of the international Paris climate agreement, rolled back Obama-era regulations on power plant-emissions and passed sweeping tax reforms that constrained financing for solar and wind. The import taxes, however, will prove to be the most targeted strike on the industry yet.

“Developers may have to walk away from their projects,” Hugh Bromley, a New York-based analyst at Bloomberg New Energy Finance, said in an interview before Trump’s decision. “Some rooftop solar companies may have to pull out” of some states.

The first 2.5 gigawatts of imported solar cells will be exempt from the tariffs, Trump said in a statement Monday. The president approved four years of tariffs that start at 30 percent in the first year and gradually drop to 15 percent.

The duties are lower than the 35 percent rate the U.S. International Trade Commission recommended in October after finding that imported panels were harming American manufacturers. The idea behind the tariffs is to raise the costs of cheap imports, particularly from Asia, and level the playing field for those who manufacture the parts domestically.

For Trump, they may represent a step toward making good on a campaign promise to get tough on the country that produces the most panels — China. Trump’s trade issues took a backseat in 2017 while the White House focused on tax reform, but it’s now coming back into the fore: The solar dispute is among several potential trade decisions that also involve washing machines, consumer electronics and steel.

“It’s the first opportunity the president has had to impose tariffs or any sort of trade restriction,” Clark Packard, a trade policy expert at the R Street Institute in Washington, said ahead of the decision. “He’s kind of pining for an opportunity.”

Trump’s solar decision comes almost nine months after Suniva Inc., a bankrupt U.S. module manufacturer with a Chinese majority owner, sought import duties on solar cells and panels. It asserted that it had suffered “ serious injury” from a flood of cheap panels produced in Asia. A month later, the U.S. unit of German manufacturer SolarWorld AG signed on as a co-petitioner, adding heft to Suniva’s cause.

An attorney for Solarworld didn’t immediately respond to a request for comment.

Suniva had sought import duties of 32 cents a watt for solar panels produced outside the U.S. and a floor price of 74 cents a watt.

While Trump has broad authority on the size, scope and duration of duties, the dispute may shift to a different venue. China and neighbors including South Korea may opt to challenge the decision at the World Trade Organization — which has rebuffed prior U.S.-imposed tariffs that appeared before it.

Lewis Leibowitz, a Washington-based trade lawyer, expects the matter will wind up with the WTO. “Nothing is very likely to stop the relief in its tracks,” he said before the decision. “It’s going to take a while.”

The solar industry may also attempt a long-shot appeal to Congress.

“Trump wants to show he’s tough on trade, so whatever duties or quotas he imposes will stick, whatever individual senators or congressmen might say,” Gary Hufbauer, a Washington-based senior fellow at the Peterson Institute for International Economics, said by email before the decision. 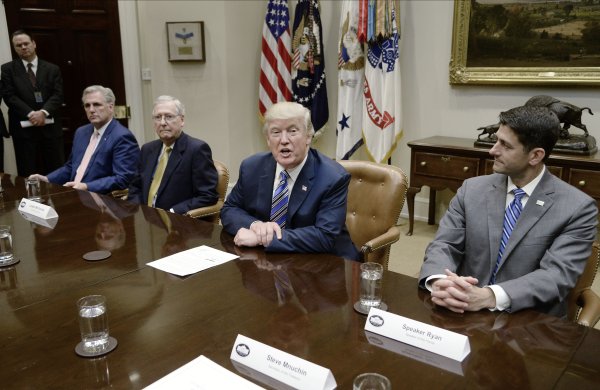 President Trump Suggests the Senate Should Invoke the Nuclear Option to Stop the Government Shutdown
Next Up: Editor's Pick