When Kanye and Kim Kardashian West announced on Friday that the name of their new baby girl is Chicago West, the meaning of the name likely seemed clear to fans: Chicago is Kanye West’s hometown.

West frequently mentions the city of Chicago in his music, and his song “Homecoming” is about the city. Chicago West was born on Monday via surrogate. But it turns out that the actual meaning of “Chicago” — beyond being the name of the Windy City — has an interesting history, giving Rumi Carter some company in the celebrity-baby-name trivia space.

The origin story behind the word that would become Chicago West’s first name was debated by historians for some time and involved Native American dialects, odd smells and botany.

Some of the story is fairly clear. Most of the competing theories that have floated around over time have a similar background, detailing that the word “Chicago” — like many American place names — comes from a similarly pronounced or spelled name in a Native American language. The word first lent itself to the Chicago River, with the city officially incorporated in 1837.

One 1890 reference book lists a number of possible derivations for the word, including the Pottowattamie words “Shecaugo” and “Choccago,” meaning “playful waters” and “destitute” respectively, as well as the words “Chicag,” “Chicagowunz” and “Chicago,” all relating to leeks or onions. Also mentioned is the Indian Chief Chikagou. A fort called “Chicagou” is also cited as being listed in French missionary Louis Hennepin’s accounts of the area as well. Another reference book from around the turn of the 20th century adds to those theories that the origin word could refer to a skunk or skunk weed, which is a plant known for its odor, or the Pottowattamie word for “destitute.” The text also brings up the Chicago River and garlic once more, citing that an account from 1695 refers to “the River of Garlic.”

And that garlic theory is the prevailing one today.

The precise plant to which the word refers was Allium tricoccum, also known commonly as ramp, argues John F. Swenson in a 1991 article on the etymology of “Chicago” for the Illinois Historical Journal. As Swenson explains, the earliest historical documentation of European exploration of the area comes from a 17th century French expedition, the records of which contain detailed descriptions of the plant in question, known as chicagoua in a language of the Illinois people. Those French records also include references to the word being used to the describe the place where it grew, not just the plant itself. In later years, the meaning would be confused with other plants of the Allium genus, and it is likely that linguistic confusion over descriptions of the plant’s odor led to the common misconception that “Chicago” translates to “bad smell.”

It was later, once the Illinois people were no longer present, Swenson notes, that the non-botanical suggestions for the meaning of “Chicago” began to pop up — including the theory, spread purely for promotional purposes, that “Chicago” means “great.” But, the author adds jokingly, people who love good food should appreciate the name “Chicago” for its original meaning.

However, Chicago West likely won’t have to worry about just where the name comes from. Her family has made it known that they will call her Chi for short. 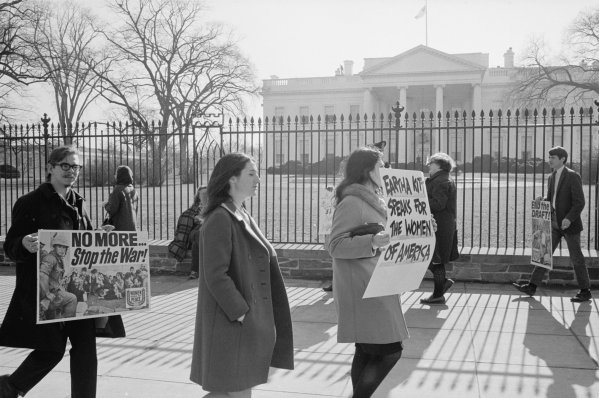 Behind the Anti-War Protests That Swept America in 1968
Next Up: Editor's Pick