Longstanding royal protocol contends that members of Britain’s most hallowed family don’t give out autographs. But for Meghan Markle, currently kicking off her first official round of visits to sites around the United Kingdom ahead of her spring nuptials, protocol is made to be worked around.

While greeting fans outside the historic Cardiff Castle in Wales this week, the personable Suits actress and Prince Harry’s fiancée spent plenty of time chatting with well wishers, receiving gifts, and even accepting a kiss on the hand from one gentleman. She also left a written note for one ten-year-old girl, Caitlin Clarke. Traditionally, protocol dictates that giving out a signature should not be allowed; the rationale is that it enables potential forgers to make use of royal handwriting. But Markle’s workaround was simple: instead of signing her name, she simple wrote “Hi Kaitlin” with a “K” on the paper provided.

“My heart is still racing. I’ve never got a royal autograph before. This is going to make everyone jealous,” lucky Clarke told PEOPLE.

There is one precedent. In 2010, Prince Charles gave his signature to victims of a flood in Cornwall.

Of course, Markle has not officially royal yet, so technically she should be free to autograph — and selfie, as she did sparingly in Wales — to her heart’s content. 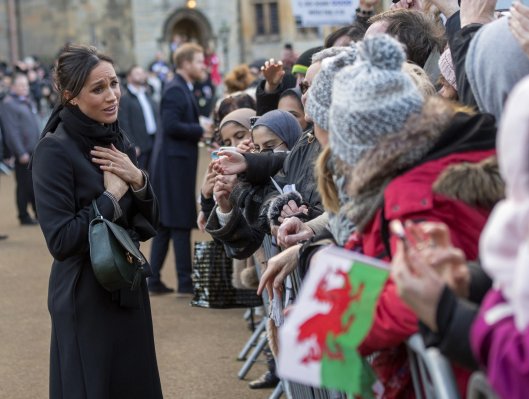 Here's the Subtle Way Meghan Markle's Style Choices Point to Her Philanthropy
Next Up: Editor's Pick