India’s test this week of a long range intercontinental ballistic missile with the capability of hitting China’s eastern coastal cities constitutes a threat to regional security, a China’s state-owned newspaper has declared, calling for increased Chinese presence in the Indian Ocean to counter its regional rival.

The ballistic missile test, India’s fifth, “poses a direct threat to China’s security as well as a big challenge to the global efforts of nuclear-nonproliferation,” China’s Global Times writes. The missile, called the Agni 5, was launched from eastern India on Thursday and traveled 3,000 miles, the New York Times reported, putting China’s coastal cities, including Beijing and Shanghai, in range. India’s last missile test was in Dec. 2016.

The missile is India’s most advanced in its Agni series—the name means fire in Hindi—and is capable of delivering a payload of 1.5 tons, enough to carry a fusion-assisted fissile nuclear warhead, according to the Delhi Defense Review, an India-based security publication. “With a range of ‘easily more than 5,500 km’ [3,400 miles], the Agni-V clearly confers upon India the ability to hold all of China’s Eastern Seaboard cities at risk from Peninsular India,” the journal said.

Other estimates have put the missile’s range at as much as 5,000 miles, with Du Wenlong, a researcher at the Chinese Academy of Military Science, previously telling the Global Times that India had “deliberately downplayed” the missile’s capacity to “avoid causing concern.”

The test comes months after a military stand-off between India and China over the 34-square-mile Doklam Plateau, a Himalayan pass between China and Bhutan that India perceives as a strategic buffer. The rivals fought a war in 1962 over disputed borders, which have never been formally resolved. India also conducted joint military exercises with Japan this week in the Indian Ocean, a key area where China is attempting to exert greater economic influence as well as flex its muscles as a regional naval power.

“India is trying to build a military system with Australia, Japan and the U.S. in order to keep a closer watch on China,” television military analyst Song Zhongping told the Global Times, adding that China should renew efforts in the Indian Ocean as part of its wide-ranging Belt and Road Initiative. 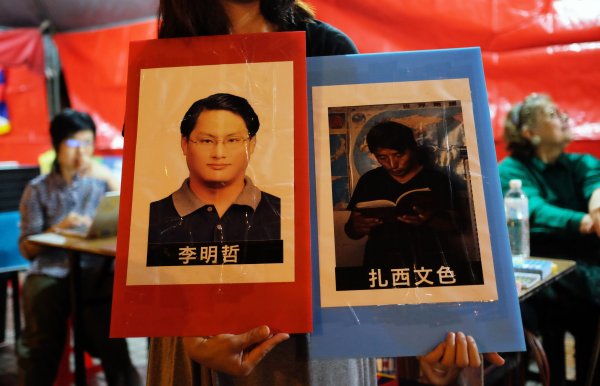 Tibetan Activist Faces 15 Years in Prison For 'Inciting Separatism'
Next Up: Editor's Pick