USA Gymnastics will not pursue a monetary penalty from Olympic gymnast McKayla Maroney for speaking out about sexual abuse allegations.

The decision comes after model Chrissy Teigen and actress Kristen Bell offered to pay the $100,000 fine Maroney would face for discussing her sexual abuse.

In October, Maroney tweeted that she was sexually abused by Larry Nassar, the national team doctor. In her post, she said the abuse began when she was 13, and continued at national training camps as well as at international events, including at the 2012 Olympics in London, where Maroney earned a gold and silver.

In a lawsuit Maroney filed against USA Gymnastics and Nassar in December 2016, Maroney says that she signed a confidential non- disclosure agreement with USA Gymnastics in which she agreed not to publicly discuss the abuse allegations; doing so would result in a reported $100,000 fine. In return, USA Gymnastics paid Maroney and her family a $1.25 million settlement.

Nassar is currently being sentenced in a Michigan court on counts of first degree sexual assault; dozens of his victims are testifying over several days at the sentencing hearing.

In a statement posted Tuesday, USA Gymnastics said: “USA Gymnastics has not sought and will not seek any money from McKayla Maroney for her brave statements made in describing her victimization and abuse by Larry Nassar, nor for any victim impact statements she wants to make to Larry Nassar at this hearing or at any subsequent hearings related to his sentencing. This has been her right and USA Gymnastics encourages McKayla and anyone who has been abused to speak out. USA Gymnastics remains focused on our highest priority — the safety, health and well-being of our athletes and creating a culture that empowers and supports them.”

Maroney’s lawyer, John Manly, said in response that “USA Gymnastics finally acknowledges that the gag order they forced on Ms. Maroney and her attorney was unenforceable.” He also notes that “The only reason this statement was issued is because people were outraged by USAG’s behavior toward Ms. Maroney and her family. So outraged that people were kindly offering to pay the six figure USAG penalty so McKayla could speak. Everyday Americans get that no one should be silenced about child molestation. They have no choice but to relent because the cleansing sunlight of truth is shining upon them and they can no longer hide their misdeeds.”

While USA Gymnastics has voiced its support of McKayla and her Olympic and national teammates who have also said they were abused by Nassar, including Simone Biles, Gabby Douglas, Aly Raisman and Maggie Nichols, the organization in December also filed a request to dismiss the lawsuits in which they are named, saying that “while Nassar is liable to the plaintiffs, USAG is not.” The group also said that “Most of the plaintiffs failed to timely assert their claims, and, therefore, their claims are time-barred.”

Nassar has already been sentenced to 60 years in federal prison on charges of possession of child pornography. He pleaded guilty to more sexual assault charges in a second Michigan county and will be sentenced for those charges later in January. 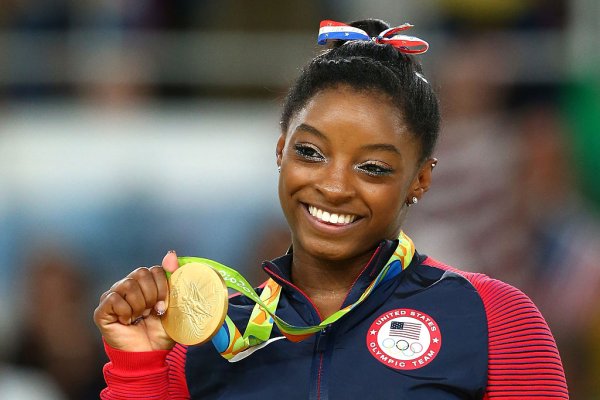 Simone Biles Says She Was Sexually Abused by Doctor
Next Up: Editor's Pick