These Actors All Worked With Woody Allen. Now They Regret It and Support Dylan Farrow

A wave of celebrities has begun speaking out against Woody Allen, more than two decades after his adopted daughter Dylan Farrow alleged that he molested her, which Allen has long denied.

In December, Farrow wrote an op-ed in the Los Angeles Times asking why actors who spoke out against other Hollywood men in the #MeToo movement continued to support Allen. In the days since the piece was published, Mira Sorvino and Greta Gerwig expressed regret for working with Allen. Rebecca Hall and Timothée Chalamet said they would donate their salaries from working on Allen’s films to anti-sexual violence organizations.

Not everyone who has worked with Allen has condemned him. Alec Baldwin, who has appeared in three of Allen’s films, said in a Jan. 16 tweet that the “renunciation” of Allen is “unfair and sad.”

“Of course, I did not molest Dylan,” Allen wrote. “No one wants to discourage abuse victims from speaking out, but one must bear in mind that sometimes there are people who are falsely accused and that is also a terribly destructive thing.”

In response to an inquiry from TIME about Farrow’s allegations and Allen’s response to celebrities speaking out against him, a spokesperson for Allen did not immediately comment but said a statement would be issued on Thursday. Farrow will give her first television interview about the allegation on CBS This Morning on Thursday as well.

Here’s a list of actors who have worked with Allen and spoken out against him since allegations against Harvey Weinstein sparked the #MeToo movement last fall. TIME will continue to update this list.

Brosnahan, who currently stars in Amazon’s The Marvelous Mrs. Maisel, said in an interview with The Hollywood Reporter published Jan. 17 that she regrets working with Allen on his 2016 limited Amazon series Crisis in Six Scenes.

“Look, I had a great experience working on that project,” Brosnahan said. “Honestly, it’s the decision that I have made in my life that is the most inconsistent with everything I stand for and believe in, both publicly and privately. And while I can’t take it back, it’s important to me, moving forward, to make decisions that better reflect the things that I value and my worldview.”

The Call Me By Your Name star announced in a Jan. 15 Instagram post that he would donate his salary from an upcoming film directed by Allen to anti-sexual assault organization RAINN, the LGBT Center in New York and Time’s Up, an anti-harassment movement launched by Hollywood women. Chalamet appeared in Allen’s upcoming film A Rainy Day in New York.

“I am learning that a good role isn’t the only criteria for accepting a job — that has become much clearer to me in the past few months, having witnessed the birth of a powerful movement intent on ending injustice, inequality and above all, silence,” Chalemet said. “I want to be worthy of standing shoulder to shoulder with the brave artists who are fighting for all people to be treated with the respect and dignity they deserve.”

Farrow responded in a tweet: “Glad to see this.”

In an interview with Oprah on CBS This Morning, Portman, one of the woman involved in the Time’s Up initiative, said that she believes Farrow. Portman previously appeared in Allen’s 1996 film, Everyone Says I Love You.

“I believe Dylan,” Portman said. “I would want to say that: ‘I believe you, Dylan.'”

Hall, who will appear with Chalamet in A Rainy Day in New York, announced in an Instagram post on Jan. 12 that she would donate her salary from the film to Time’s Up. In her post, Hall said that she was “grateful” that Allen had given her one of her first big roles — in his 2008 film Vicky Christina Barcelona — but said she’s been reflecting on Farrow’s allegations in recent weeks.

“After reading and re-reading Dylan Farrow’s statements of a few days ago and going back and reading the older ones – I see, not only how complicated this matter is, but that my actions have made another woman feel silenced and dismissed,” Hall wrote. “That is not something that sits easily with me in the current or indeed any moment, and I am profoundly sorry.”

Actress Mira Sorvino attends the premiere of "Mothers and Daughters" at The London on April 28, 2016 in West Hollywood, California.
Jason LaVeris—FilmMagic

Sorvino, who won an Academy Award for her role in Allen’s 1995 film Mighty Aphrodite, apologized to Farrow in an open letter published on HuffPost on Jan. 10.

“I am so sorry, Dylan,” wrote Sorvino, one of the woman who accused Hollywood mogul Harvey Weinstein of sexual harassment. “I cannot begin to imagine how you have felt, all these years as you watched someone you called out as having hurt you as a child, a vulnerable little girl in his care, be lauded again and again, including by me and countless others in Hollywood who praised him and ignored you.”

In an interview with the New York Times published on Jan. 9, the Lady Bird director said she regretted working with Allen in his 2012 film To Rome With Love.

“If I had known then what I know now, I would not have acted in the film. I have not worked for him again, and I will not work for him again,” Gerwig said. “Dylan Farrow… made me realize that I increased another woman’s pain, and I was heartbroken by that realization.”

Krumholtz, who appeared in Allen’s 2017 film Wonder Wheel, said in a Jan. 5 tweet that he regrets working with Allen.

“It’s one of my most heartbreaking mistakes,” said Krumholtz, known for his roles in The Deuce and 10 Things I Hate About You. “We can no longer let these men represent us in entertainment, politics or any other realm. They are beneath real men.”

In a Facebook post on Nov. 10, Page said working on Allen’s 2012 film To Rome With Love was “the biggest regret of my career.”

“I am ashamed I did this,” Page wrote. “I had yet to find my voice and was not who I am now and felt pressured, because ‘of course you have to say yes to this Woody Allen film.’ Ultimately, however, it is my choice what films I decide to do and I made the wrong choice.”

Newman, who has a small role in Allen’s upcoming film A Rainy Day in New York, said in a series of tweets on Oct. 14 — days after the allegations against Weinstein broke — that he believes Woody Allen is guilty. He said he donated his salary from the film to RAINN. 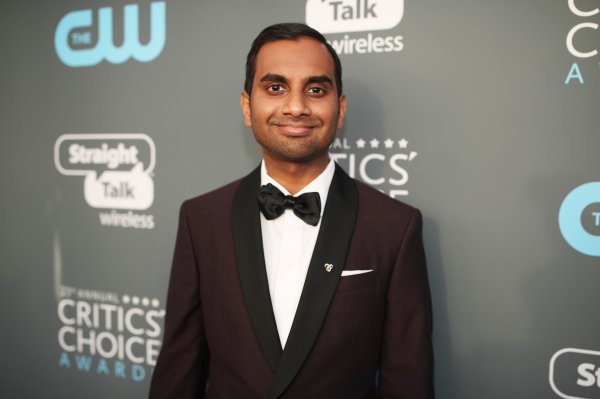 The Aziz Ansari Allegation Has People Talking About 'Affirmative Consent.' What's That?
Next Up: Editor's Pick