Chrissy Teigen has offered to pay a potential fine that Olympic gymnast McKayla Maroney could incur if she breaks a nondisclosure agreement with USA Gymnastics that prevents her from discussing allegations that she was molested by a former USA Gymnastics team doctor, Larry Nassar.

Maroney, who is one of more than 100 women who have accused Nassar of sexual abuse, signed a nondisclosure agreement in 2016 that included a $100,000 fine if she spoke out about the abuse as part of a settlement from USA Gymnastics, according to the lawsuit. She is suing U.S. Olympic Committee, USA Gymnastics and Michigan State, claiming she “was forced to agree to a nondisparagement clause and confidentiality provision,” the New York Times reports. The suit came months after an investigation by the Indianapolis Star reported that USA Gymnastics had allegedly failed to respond appropriately in reporting sexual abuse complaints to police.

On Tuesday, Teigen tweeted a screenshot of a Daily Mail headline regarding the potential fine Maroney would have to pay, calling into question the “entire principle” of nondisclosure agreements and offering to pay the money if Maroney chooses to talk about her experiences.

“I would be absolutely honored to pay this fine for you, McKayla,” Teigen said.

Maroney said in October that Nassar sexually abused her for years, starting when she was 13. Nassar faces similar accusations from dozens of athletes, including by U.S. gymnasts Gabby Douglas, Maggie Nichols, Simone Biles and Aly Raisman.

Nassar, who was sentenced to 60 years in prison after pleading guilty to federal charges of child pornography in December, has pleaded guilty to 10 counts of first degree criminal sexual assault in two Michigan courts. Several of the women who said they were abused are expected to testify in sentencing hearings that begin this week.

Maroney thanked Teigen for her offer on Tuesday.

“I’m not on social media right now, but I wish I was for this! I’m shocked by your generosity, and I just want you to know how much hope your words bring to all of us! I just can’t get over the fact that someone I don’t personally know is sticking up for me, let alone a strong women that I’ve looked up to for years!” Maroney said in a statement through her attorney. “Thank you Chrissy, you’re so inspiring, and things are starting to change because of people like you! Just saying that was worth the decision to speak up regardless of a fine.” 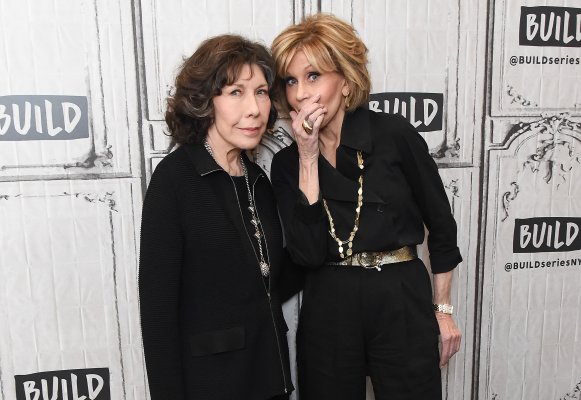 Jane Fonda Had Quite a Comeback to Lily Tomlin's 'Facelift' Joke
Next Up: Editor's Pick