As Diana Prince in Wonder Woman, Gal Gadot plays a character who fights for equality and what’s right, putting herself on the line to protect the disenfranchised. In real life, Gadot seems to be following a similar path, speaking out about the importance of standing up for the less empowered.

At Thursday night’s Critics’ Choice Awards in Santa Monica, Gadot was honored with the #SeeHer prize “pushing boundaries” and “changing stereotypes” while portraying a character onscreen. Introduced by her Wonder Woman director Patty Jenkins, Gadot spoke about the parallels between the world of her superhero character and the role of an actor, tying in the goddess’s mission with that of more recent events in Hollywood.

“As artists, and as filmmakers, I believe it’s not only our job to entertain, but our duty to inspire and educate for love and respect,” she said. “In the past weeks and months, we’ve been witnessing a movement in our industry and society, and I want to share this award with all the women and men who stand for what’s right: Standing for those who can’t stand or speak for themselves. My promise and commitment to all of you is that I will never be silenced, and we will continue to band together to make strides, uniting for equality.”

Wonder Woman was one of 2017’s top-grossing films, and Gadot and Jenkins are already signed on for the sequel. 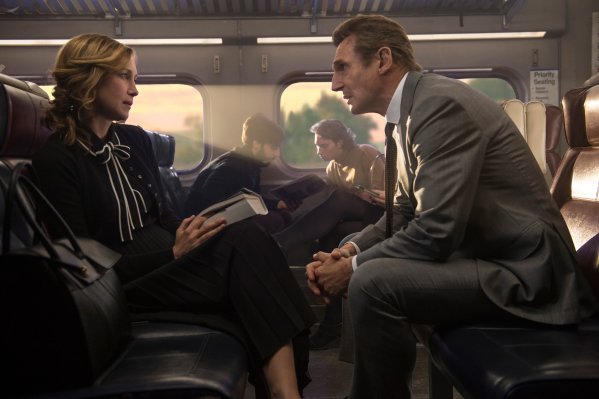 In The Commuter, Liam Neeson Saves a Train with Implausible Aplomb
Next Up: Editor's Pick