The actor attended the National Board of Review Awards in New York City, where he presented Meryl Streep the Best Actress prize for her work in The Post. The film, which tells the story of the Washington Post‘s pursuit to publish the Pentagon Papers in the 1970s, provided ample opportunity for De Niro to take a few swipes at the current presidential administration.

The events of The Post “took place nearly 50 years ago, but there are many parallels today, obviously,” De Niro said during his speech. “At the time of the story, Donald Trump was suffering from ‘bone spurs.’ Today, the world is suffering from the real Donald Trump.

“This [expletive] idiot is the president,” De Niro added. “It’s the Emperor’s New Clothes — the guy is a [expletive] fool.”

The two-time Oscar winner didn’t stop there, riffing more on the present-day relationship between Trump and the media, while calling the president the “baby-in-chief.”

“Just like in 1971, the press is distinguishing itself with brave, exacting journalism,” De Niro said. “The movie gave us glimpses of President Nixon as delusional, narcissistic, petty, vindictive, nasty and [expletive] crazy. Ah, the good old days.”

De Niro has spoken out against Trump several times in the past. Perhaps most famously, he appeared in a 2016 video urging people to vote, saying he’d “like to punch Trump in the face.” 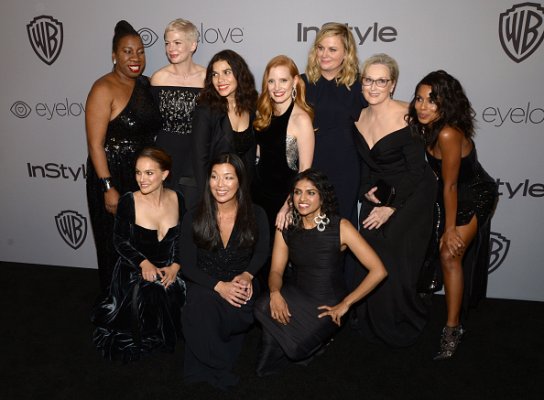 Natalie Portman Called Out the Hollywood Boys' Club at the Golden Globes. A New Study Backs Her Up
Next Up: Editor's Pick