'Praying for Our Community.' Oprah’s Home Was in the Middle of the California Mudslide

Oprah Winfrey has shared videos showing the impact powerful mudslides in California have had on her own home.

“What a day!” Winfrey wrote on Instagram Tuesday. “Praying for our community again in Santa Barbara.”

Mudslides swept through Santa Barbara County following a storm that hit the coastal community, killing at least 15 people and injuring at least 25. Winfrey and other celebrities such as Rob Lowe and Ellen DeGeneres have homes in the affected area.

On Instagram, Winfrey revealed that she woke up to a gas fire in her neighborhood and that helicopters were rescuing her neighbors. A second video showed mud outside Winfrey’s home so deep that it came up almost to her knees.

“The house in the back is gone,” the recent Cecil B. DeMille Award recipient said in the video, although it was unclear what exactly happened to the home and whether it belonged to her.

The area has been hit by mudslides just a month after wildfires burned through the region.

PEOPLE reports Winfrey purchased her property in Montecito in 2001. 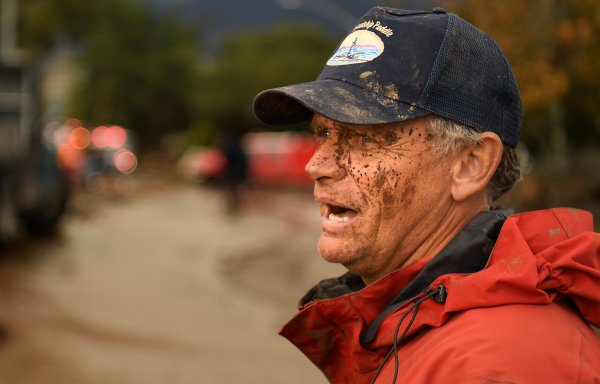 These Grim Photos Capture the Deadly Destruction of the Montecito Mudslides
Next Up: Editor's Pick