An Oprah 2020 Campaign Could Tarnish Her Golden Image

So far this week, Oprah Winfrey has learned the fun part about running for President: supporters begging you to jump in the race, pundits speculating feverishly about your chances, your best friend going on a talk show to dish about what you’re thinking.

She’s also starting to get a taste of the less fun part, too.

Just one day into the hypothetical Oprah for President 2020 campaign — sparked by a powerful speech at the Golden Globes — an old photograph of Winfrey kissing the cheek of disgraced Hollywood producer Harvey Weinstein at a Hollywood function began circulating online. Conservative news sites picked up the thread from there.

Is Oprah running for President? No one knows. But until she gives a Shermanesque answer that she’s not, she’s going to start facing brushback.

There’s one person she can blame for this, and he’s sitting in the White House.

Even into early 2016, Donald Trump’s Republican rivals and Democrats who might have eventually faced him in the general election had not done the kind of exhaustive years-long research that Beltway operatives typically do on the backgrounds of potential candidates — that dark art known as “opposition research,” or “oppo.”

Trump’s face wasn’t even on the cover of the liberal American Bridge super PAC’s “scouting report” on the 2016 Republican field, which had 20 potential candidates ranging from longshots, such as Ben Carson, to potential frontrunners, like Jeb Bush. (To be sure, there was research being done which ultimately led to the Steele dossier concerning Trump’s relationship with Russia, but that was not publicly released until January of 2017.)

Winfrey won’t be given this luxury. The internal practices of her business, Harpo Productions, will be pored over. Her role in promoting the careers of Dr. Phil and Dr. Oz, who have been criticized by medical professionals for some of the advice they give on air, will be scrutinized. Her personal life will be given a rough treatment by the tabloids.

It might be weird to think of Winfrey as having something to hide. She is, after all, the reigning queen of self-disclosure. Her long-running talk show featured a comforting environment for guests to talk about their own problems, which Winfrey encouraged by periodically sharing her own struggles with weight and sexual abuse, even admitting on the air in 1995 that she had used cocaine in her twenties.

In a 2005 interview with entertainment reporter Billy Bush — a cousin of Jeb Bush and the other person on the infamous “Access Hollywood” tape with Trump — Winfrey joked about how her life was an “open book,” citing a celebrity friend who later turned out to have a few hidden chapters of his own. “I am such an open book that at one point in my career, Bill Cosby, being the good friend that he is, called me up and said, ‘Do you have any children that are hidden away in an orphanage somewhere?'” she recalled.

But self-disclosure is not the same as disclosure. Presidential candidates often learn that their past can come back to haunt them at the worst times, as George W. Bush did when an old drunk driving arrest surfaced just before the 2000 election, or Barack Obama did when controversial sermons given by his former pastor surfaced during the 2008 primary.

Winfrey is one of the most popular women in America. Her Q score — a measure of how well-liked a celebrity is — is through the roof, and she regularly makes Gallup’s list of most admired women. But she’s also never faced the kind of sustained attacks that are routine for a political candidate, especially one facing a crowded primary field and a fistfighter like Trump in the general election.

It remains to be seen how she would hold up in those circumstances. Some fans are already worried.

If Winfrey doesn’t believe her reputation will be affected, she can ask a one-time guest on her show, President Donald J. Trump, who saw opinions of the value of his brand drop when he entered politics, according to one survey by a branding agency, while revenue fell at many of his hotels. The sting hurt enough that Trump’s name has since been removed from two hotels and an apartment building. It’s unlikely Winfrey will face as steep a drop as Trump. But with sky-high approval right now, she has nowhere to go but down. 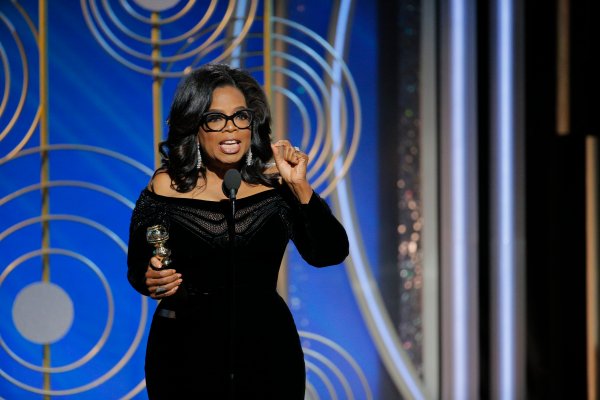 How Oprah Could Beat Trump in 2020
Next Up: Editor's Pick