Oprah Winfrey has more in common with Donald Trump than you might think. In several key ways, she even beats him at his own game.

After a powerful speech on sexual harassment at the Golden Globes Sunday, many of Winfrey’s fans took to the Internet to call on her to run for president against Trump in 2020.

So how do Trump and Winfrey stack up?

Both are billionaires, worth roughly the same amount. With a $2.9 billion net worth, Winfrey was the third-richest woman in America in 2017. Trump’s net worth that same year was $3.1 billion, according to Forbes’ annual list. Score one for Trump.

Both are media personalities famous enough to be known by one name. Winfrey dominated daytime TV with a show that ran for 25 years. Trump was the star of The Apprentice reality show, which has run for 15 seasons. Score one for Oprah.

Both joined Twitter in early 2009. Winfrey, who started an account that January, now has 41.2 million followers. Trump, who joined two months later, has 46.3 million followers on his personal account. Score one for Trump.

Both are skilled at self-promotion. Winfrey is featured on the cover of every issue of O The Oprah Magazine, which has run since 2000 and has 2.4 million readers. Trump started three magazines, which never got more than a 200,000 readers. Score one for Oprah.

Both are well-known to the public. Trump was named the second-most admired man by Gallup in 2017, with 14 percent of respondents. Winfrey was named the third most-admired woman that same year, with four percent. Score one for Trump.

Both have testified before Congress. Winfrey appeared as a witness in favor of a bill to allow child care centers to do criminal background checks on job applicants in 1991. Trump testified in 1993 that operators of Native American casinos “don’t look like Indians to me.” Score one for Oprah.

Both have played the role of presidential kingmaker. Winfrey endorsed Barack Obama during the 2008 primaries, a moment that may have played a role in his win over Hillary Clinton. Trump endorsed Mitt Romney in the GOP primary in 2012. Call that a tie.

And now both have sparked speculation in the media about presidential runs. Trump publicly toyed with the idea starting in the 1980s. Winfrey has long said she’s not interested in running for office, but keeps getting mentioned. Call that another tie.

If Winfrey ran for the Democratic nomination in 2020, they would have even more in common.

Based on the response to Winfrey’s speech on Sunday, she could easily command entire news cycles with a mix of TV appearances and public events, as Trump did in 2016, earning what MediaQuant estimated was $4.6 billion in free air time.

She would be entering a crowded Democratic field that will likely include a mix of former politicians, up-and-comers who aren’t well known nationally yet and third-tier contenders, as Trump did in 2016, winning as his opponents failed to coalesce behind a single rival.

She would have no prior record in elected office and only sporadic comments on various issues in the past, allowing her to run an aspirational campaign without releasing any detailed plans, as Trump did in 2016.

If she wanted to — and there’s no reason to believe she actually does — Winfrey could easily come from nowhere to dominate the Democratic field and upend the plans of countless strategists, Beltway insiders and party officials. Even if she didn’t win the nomination, she would exert a gravitational pull on the entire field.

Democrats may bemoan Trump’s empty-calorie celebrity campaign win, but there’s no reason to believe that they couldn’t face one of their own. 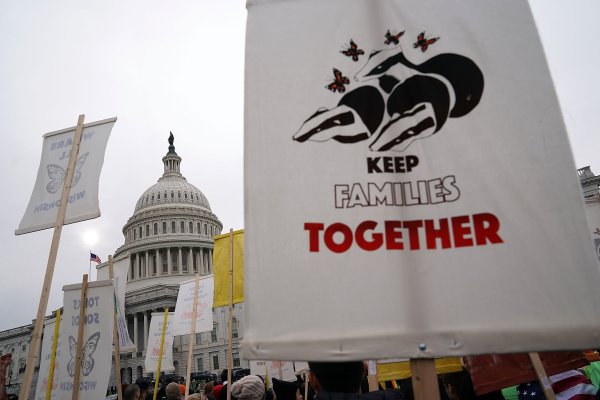 Trump Decision Could Deport 200,000 Salvadorans
Next Up: Editor's Pick