The Internet Can't Get Over James Franco Blocking Tommy Wiseau

In this handout photo provided by NBCUniversal, James Franco, with Tommy Wiseau and Dave Franco, accepts the award for Best Performance by an Actor in a Motion Picture – Musical or Comedy for “The Disaster Artist” during the 75th Annual Golden Globe Awards at The Beverly Hilton Hotel on January 7, 2018 in Beverly Hills, California
NBC/Getty Images
By Ashley Hoffman

James Franco wanted to give Tommy Wiseau credit, but he draws the line at airtime.

On Sunday night at the Golden Globes, Franco took the stage to accept the coveted award Best Performance of an Actor in a Motion Picture — Musical or Comedy for his portrayal of the eccentric writer-director Tommy Wiseau in the movie The Disaster Artist, about the making of the iconically bad cult Wiseau movie The Room. So it was only fitting that Franco brought Wiseau onstage for the honor.

But when Wiseau made a move to grab the mic like a spotlight-stealing torpedo, Franco rebuffed him. On defense, Franco even went so far as to push Wiseau back to the sidelines with a shutdown move that quickly became one of the biggest memes of the night. Some of the folks at home thought the moment was hilarious, while others criticized Franco’s decision. As for what Wiseau would have said, he had a simple message to impart.

He told the LA Times this: “If a lot of people loved each other, the world would be a better place to live,” he said before working in a plug for the original film. “See ‘The Room,’ have fun, and enjoy life. The American Dream is alive, and it’s real.”

This was Franco’s first Golden Globe. But it wasn’t all positive recognition for the actor.

Viewers and The Breakfast Club’s Ally Sheedy also went on Twitter to criticize Franco for his alleged past treatment of women.

See the internet’s reactions below. 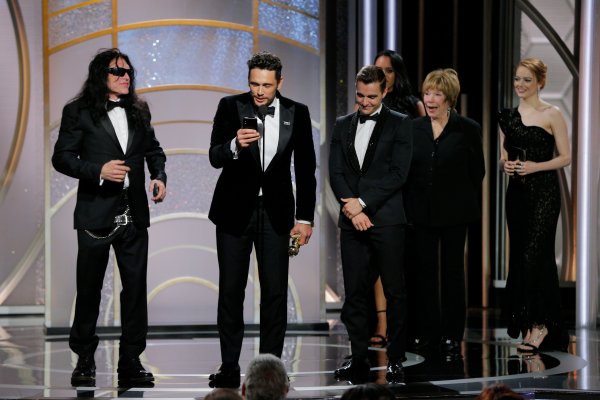 Why People Are Calling Out James Franco After the Golden Globes
Next Up: Editor's Pick