After a Two-Year Silence, North and South Korea Are Finally Talking. Here's What to Expect

For the first time in two years, South and North Korea have opened up a line of direct communication. Both sides have sent high-level delegations to the border to discuss Pyongyang’s participation in next month’s winter Olympics, but experts say the tentative rapprochement could have greater significance amid the nuclear standoff between Washington and Pyongyang.

The meeting also follows hostile rhetoric from both capitals around the start of the New Year, when North Korean leader Kim Jong Un warned in an annual address that he has a nuclear button “on my desk at all times.” U.S. President Donald Trump responded by saying his own button is both “much bigger and more powerful.” But during his provocative speech, Kim also extended an olive branch to Seoul; he said he wanted North Korean athletes to participate in this year’s Olympics in Pyeongchang. South Korea’s President Moon Jae-in, an advocate for dialogue with North Korea, said the overture was “an epoch-making opportunity to improve inter-Korean relations and establish peace.”

Talks are now under way in the South Korean village of Panmunjom, straddling the demilitarized zone demarcating the border. South Korea’s delegation is led by Unification Minister Cho Myoung Gyon, while the North’s is headed by Ri Son Gwon, head of the Committee for the Peaceful Reunification of the Fatherland.

Are these talks really about the Winter Olympics?

Yes and no. The talks were agreed upon hours after Washington and Seoul decided to delay an annual military exercise that North Korea views as preparation for war. While the dialogue has largely been viewed as a positive step (and Pyongyang’s participation in the Games would make provocations less likely during the event) there is some concern that the situation will return to the status quo once the Olympics are over and regular military activity resumes between South Korea and its U.S. ally.

“It’ll start with the Olympics but it won’t end with the Olympics,” says John Delury, a professor of international relations at Yonsei University in Seoul, adding that sports diplomacy is being used as a tool by both sides to resurrect dialogue.

South Korean Sports Minister Do Jong-hwan said last week the dialogue could represent an olive branch after a year of threats and nuclear and missile tests by the rogue regime. He told Yonhap News that the South is trying to use Olympics to “help reduce military tensions on the Korean Peninsula, improve inter-Korean relations and restore peace on the peninsula.”

What do these talks mean for the U.S.?

Not as much as some hope and others fear. Some analysts say the talks could potentially pave the way for future dialogue between the Koreas, and Trump even told reporters this week that he would be willing to speak with Kim. His Ambassador the U.N. Nikki Haley, however, later said the White House was not softening its stance and would have a few conditions for dialogue.

There are also concerns that the North may be attempting to undermine the U.S.-South Korea alliance by circumventing Washington and seeking to forge new diplomatic channels. “We need to be very cautious about our expectations given North Korea’s long history of effectively using these talks to drive a wedge between South Korea and its partners, and to push for concessions Seoul couldn’t possibly accept,” Mintaro Oba, a former Obama State Department official who worked on North Korean affairs, told VOX.

Regardless, experts agree that some form of dialogue is preferable to no dialogue.

What are the likeliest outcomes?

Beyond the scope of Olympic participation, the two delegations are positioned to discuss “inter-Korean issues,” says Daniel Pinkston, an international relations expert and lecturer at Troy University, adding that while the South will likely push the issue of families separated by the war, a concrete agreement is improbable.

“I think it is likely the two sides will agree to further talks on more sports exchanges and other areas such as restarting work on a common Korean dictionary, which has been suspended, as well as other cultural exchanges that do not violate sanctions against North Korea,” Pinkston tells TIME.

Delury said that the talks are unlikely to result in any breakthrough on the topic most observers care most about: denuclearization. “This is not going to directly solve the nuclear puzzle,” he says, “but any dialogue is helpful” as it will lead to a greater understanding of what makes the regime tick.

Robert Kelly, a professor of international relations at Pusan National University in South Korea, told the Washington Post that the North may see engaging in the Olympics as a concession for which it will expect to be rewarded. “But these are not real concessions — they are costless,” he said, adding that for the North, this may be little more than a “shakedown racket.” 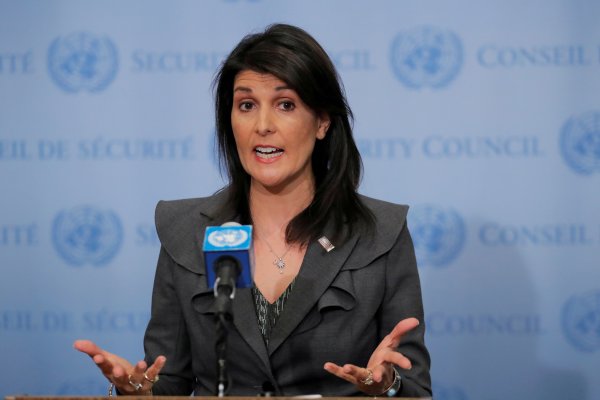 Nikki Haley: U.S. Is Not Softening on North Korea
Next Up: Editor's Pick