However Small, North Korea's Olympics Talks Are a Victory

In North Korea, the Supreme Leader’s New Year’s speech is his most important annual political statement, one that is endlessly parsed for hints at the secretive Stalinist state’s policy priorities for the next 12 months. As 2018 dawned, a bespectacled Kim Jong Un, wearing a light gray suit, stood at a wooden podium to tell his 25 million countrymen “the entire continent of America is within reach of a nuclear attack” following his regime’s latest missile and nuclear tests. Washington, he warned, should “never forget the nuclear button is placed on my desk at all times.”

But Kim also adopted a conciliatory tone, declaring his wish “for peaceful resolution with our southern border,” and offering talks over sending a delegation to the Winter Olympics in South Korea in February. On Tuesday, those talks will take place at the DMZ that has divided the peninsula since the 1950-3 Korean War. They will be the first direct inter-Korea discussions since the spring of 2016, when then South Korean President Park Geun-hye severed communications in response to Pyongyang’s fourth nuclear test.

Despite their limited remit — solely North Korea’s participation in Pyeongchang — that the talks are taking place at all is heartening after a 2017 of customary threats and antagonism from Pyongyang, and unprecedented vitriol from the White House. U.S. President Donald Trump has threatened Kim with “fire and fury,” derided him as “little rocket man,” and only last week boasted that his own nuclear button was “much bigger and more powerful.” Despite in October calling talks a “waste of time,” Trump on Jan. 4 described them as a “good thing,” and, in true Trumpian fashion, even took credit for their fruition.

“The real play here is ultimately seeing whether Seoul provides an opening point for the North Koreans to have some sort of talks with the Americans bilaterally,” Prof. Stephan Haggard, a Korea expert at the U.C. San Diego School of Global Policy.

That the talks are taking place now is largely to the credit of South Korean President Moon Jae-in, the son of refugees from the North, who was elected on promises to restart measured reengagement with the Kim regime without giving it a free ride. But his entreaties to come to the negotiating table were repeatedly batted away by Kim until now. So why the change?

It could be because of the two new rounds of U.N. sanctions, which China — North Korea’s neighbor and economic umbilical cord — has been enforcing comparatively stringently. There are signs that these have started to bite the regime. However, “one thing North Korea can do is withstand external economic pressure,” says John Delury, an East Asia expert at Seoul’s Yonsei University. “So I’d be cautious about doing a victory lap and saying the sanctions are working.”

What may have a greater bearing is that Kim now feels safe enough behind his completed nuclear deterrent to start reengagement and seek concessions. Around a third of his New Year’s speech concerned economic goals, which seem to rest on slackening the sanctions noose. The reality of North Korea’s nuclear threat likely also lies behind Washington’s changing tenor. Last month, U.S. Secretary of State Rex Tillerson told the Atlantic Council in Washington, “We’re ready to talk anytime North Korea would like to talk… without preconditions.”

According to the New York Times, when Trump entered the Oval Office his key advisers predicted upward of four years before the regime could hit the continental U.S. with a nuclear-armed ICBM. But that time is, in fact, now. That the U.S. has agreed to push back its joint exercises with South Korea — drills that Pyongyang loathes, deeming them a dress rehearsal for invasion — until after the Olympic program is complete is indicative of how much stall has been put in this new opening. “It’s clear the missile and nuclear program has far exceeded anyone’s expectations,” says Haggard.

What comes next is less certain. Talking about the Winter Olympics is positive but is a long way from unilateral nuclear disarmament. China appears hopeful the opening could pave the way for a “freeze for freeze” agreement, ceasing the joint military drills in exchange for a moratorium on the North’s nuclear tests. However, on Jan. 4, U.S. Defense Secretary Jim Mattis said the joint military drills would resume after the March 9-18 Paralympics, which will surely chill any nascent rapprochement.

The best short-term goals may be for family reunions or cultural exchanges. South Korea has little power to open the economic spigot alone, lest it fall foul of U.N. sanctions it has championed. Ultimately, for a resumption of the Six-Party denuclearization talks — comprising North and South Korea, Japan, Russia, China and the U.S. which ran from 2003 to 2009 before Kim’s father Kim Jong Il walked away — the regime’s nuclear arsenal would need to be on the agenda. “And that’s just not going to happen,” says Haggard.

But that’s not to say the current thaw is without value. Firstly, the presence of North Korean athletes drastically reduces the risk of some provocation from Pyongyang timed around the Games. But more crucially it restores a pressure valve for reducing the tensions that Trump’s Twitter diplomacy just seems to stoke.

Presuming Kim’s paramount goal is the survival of his regime, he is extremely unlikely to attack the infinitely more powerful U.S. or one of her allies, cognizant that it would undoubtedly herald his own annihilation. That is how nuclear deterrence works. The danger comes from any unintended provocation — a nuclear accident, a missile test that goes askew, or a scuffle at the DMZ — which could spiral into full-blown war without the mechanisms for swift deescalation. When the stakes are so high, talking for the sake of talking is not pointless — it is a goal of its own. Because without dialogue, says Delury, the situation “is like a dry summer just waiting for a match.” 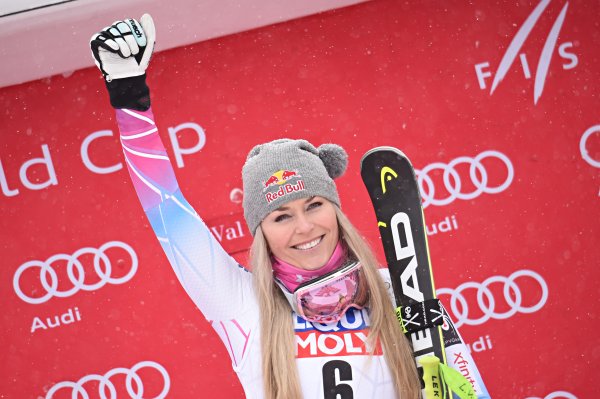 5 Things to Know About Lindsey Vonn as She Goes for the Gold at the 2018 Winter Olympics
Next Up: Editor's Pick