Elisabeth Moss won Best Actress in a Drama Sunday night during the 75th Golden Globe awards for her work in The Handmaid’s Tale, and she dedicated her award to author Margaret Atwood, the novelist whose book inspired the series.

Atwood’s seminal dystopian novel, published in 1985, examines a world in which women are removed from the workplace and, in some cases, forced to bear children for wealthy couples. Atwood worked closely with the creators of the Hulu show and its star, Moss, to bring the story to life. The Handmaid’s Tale took on a new meaning when it premiered shortly after the Women’s March in early 2017, which was organized following Donald Trump’s presidential election win, and again following the #MeToo movement that unmasked harassers in Hollywood, starting with Harvey Weinstein.

After thanking many people during her Golden Globes speech, Moss pulled out a slip of paper to quote Atwood herself. “This is from Margaret Atwood,” she said, before reading: “‘We were the people who were not in the papers. We lived in the blank white spaces at the edge of print. It gave us more freedom. We lived in the gaps between the stories.”

“Margaret Atwood, this is for you and all of the women who came before you and after you who were brave enough to speak out against intolerance and injustice and to fight for equality and freedom in this world,” she continued. “We no longer live in the blank white spaces at the edge of print, we no longer live in the gaps between the stories, we are the story in print and we are writing the story ourselves.” 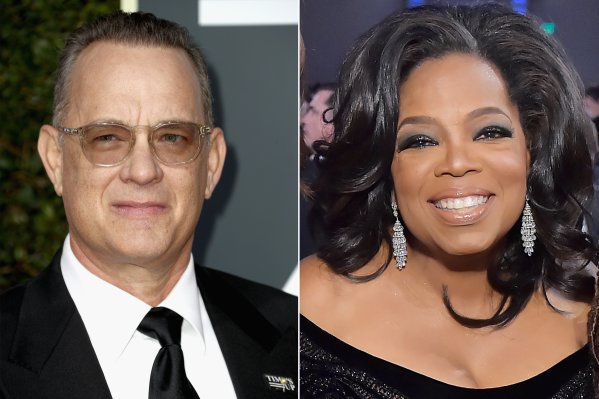 The Internet Is Ready for an Oprah and Tom Hanks White House In 2020
Next Up: Editor's Pick