In the wake of the #MeToo and #TimesUp initiative, Late Night’s Seth Meyers’ opening monologue for the 75th Golden Globe Awards was bound to be particularly tricky. As he acknowledged in his bit, many people argued a woman should have hosted the Golden Globes this year. But Meyers took the issue head-on and, following some opening remarks, smartly ceded the floor to women, people of color and queer people to make some of the jokes that he, as a straight white guy, couldn’t really make.

Before that, he delivered a searing opening monologue. “Good evening ladies and remaining gentlemen,” he began. “It’s 2018, marijuana is finally allowed and sexual harassment finally isn’t.”

Meyers applauded the change that has swept Hollywood as actors, directors and producers have sworn to combat sexism. “It’s been years since a white man was this nervous in Hollywood,” he joked. “For the male nominees in the room tonight, this is the first time in 3 months it won’t be terrifying to hear your name read out loud.”

He then took on some of the powerful men who were revealed to be serial harassers and assailants this year. Of super-producer Harvey Weinstein, Meyers cracked, “He’ll be back in 20 years when he becomes the first person ever booed in the in memoriam.”

Meyers then took a shot at Kevin Spacey. “They’re going to do another season of House of Cards? Is Christopher Plummer available for that too?” he asked, referring to the fact that All the Money in the World was re-shot with Plummer in Spacey’s role in the the month before the movie’s release. “I hope he can do a Southern accent because Kevin Spacey sure couldn’t.” When the audience groaned he shot back, “Oh was that too mean?…To Kevin Spacey?”

He also mentioned a director who has been accused of sexual misconduct for years but continues to work: Woody Allen. He said when he heard the premise of the fantasy-drama The Shape of Water, a movie that leads the night with seven Golden Globe nominations, “I have to admit when I first heard about a film when a naive young girl falls in love with a disgusting sea monster I thought, ‘Oh man, not another Woody Allen movie.'”

Meyers then introduced a bit he does on his late-night show: After setting up a joke that he really shouldn’t tell as a straight white man, he passes off the microphone to other comedians to land the punch line. Meyers described Call Me By Your Name as a coming-of-age story for a young, queer man. Billy Eichner then cracked that Kevin Spacey said, “You lost me when you said ‘of age.'”

Meyers then said Issa Rae, star and creator of Insecure, has three projects in development. “‘Three projects’ is also where they think I’m from,” she deadpanned.

Finally, Meyers quoted a stat that found only 5% of speaking roles in Hollywood are played by Asian actors. Hong Chau of Downsizing then joked, “But those numbers may be off since a white man did the math.” 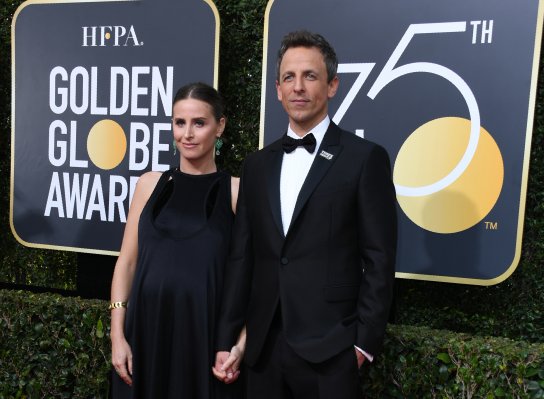 These Men Wore Time's Up Pins on the Golden Globes Red Carpet
Next Up: Editor's Pick