Fake Donald Trump tweets are seen in a Twitter timeline on 27 Friday, 2017. In China a site that generates fake tweets that look as if they were generated by US president Donald Trump are being used to mock the president.
NurPhoto—NurPhoto/Getty Images
By Lisa Marie Segarra

It’s not fake news. The American Dialect Society’s 2017 Word of the Year is: “fake news.”

The society chose the phrase on Jan. 5, which they defined as “disinformation or falsehoods presented as real news” and “actual news that is claimed to be untrue.” It was selected for “best representing the public discourse and preoccupations of the past year,” according to a release from the ADS.

The word was also added as an entry on Dictionary.com, though that definition only encompasses news stories that are fabricated.

The word was actually considered by the ADS a year ago for 2016’s Word of the Year, but it wasn’t selected because it’s meaning was restricted to “fictional or embellished stories presented as authentic news, disseminated for financial gain or for propagandistic purposes,” the release said. The ADS noted that the meaning has been altered as the word has become widely used by President Donald Trump.

“When President Trump latched on to fake news early in 2017, he often used it as a rhetorical bludgeon to disparage any news report that he happened to disagree with,” said Ben Zimmer, chair of the American Dialect Society’s New Words Committee. “That obscured the earlier use of fake news for misinformation or disinformation spread online, as was seen on social media during the 2016 presidential campaign.”

Members in the 129-year-old organization include linguists, lexicographers, etymologists, grammarians, historians, researchers, writers, editors, students, and independent scholars, according to the ADS release. 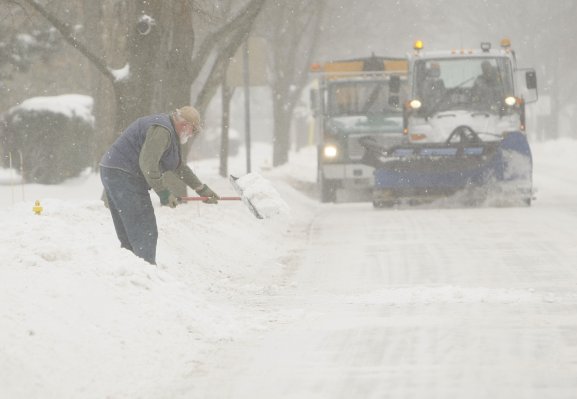 This Man Made a Snow Plow Using His Lawn Mower and a Cardboard Box
Next Up: Editor's Pick